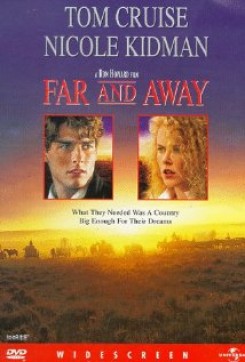 Far and Away is an epic romantic drama about two Irish immigrants and their adventures in coming to America. The story begins in Galway, Ireland during the Irish Land Wars of a hundred years ago. There is great animosity between the wealthy land owners and the people who rent the land and till the soil. Joseph Donelly is the son of a poor farmer, whose dying words to Joseph are, "A man is nothing without land."

His father's funeral is interrupted by an agent for the landlord who orders them off the land for non-payment of rent and sets fire to their home. Joseph seeks his revenge upon the landlord, David Christie, a decent man, unaware of the villainies of his agents. Joseph's plan to kill Christie is thwarted when he's stabbed with a pitchfork by Christie's daughter, Shannon, who discovers him hiding in their barn.

While Joseph mends in the Christie home, Shannon tells him of her dream to seek her fortune and adventure in America where citizens will be given one hundred sixty acres of Oklahoma land. When Joseph is challenged to a gun duel by her fiance, Shannon saves the day by racing onto the dueling field in a carriage and carrying the confused Joseph away. She's determined to run away to America, but as a woman dare not travel alone. Joseph's presence as her servant will give her safe passage.

The pair set sail for America, but upon arrival in Boston, Shannon is robbed of the valuables she had brought to finance her adventure and finds herself just as poor as Joseph. Undaunted, Shannon perseveres hardships and experiences she has never known. Joseph discovers there's gold in his fists and earns a small fortune fighting before losing it all in one brutal match. The two adventurers fall in love, but in a desperate attempt to save a critically injured Shannon, Joseph returns her to her family and leaves. The lovers meet again in the exciting climax which culminates in the Oklahoma land race.

There's animal action from the opening scenes in the picturesque Irish countryside and village to the finish on the vast American frontier. American Humane became involved with preparations for scenes involving animals weeks before any filming actually began. Our representative, Ed Lish, traveled to Montana to inspect the accommodations for large numbers of horses and livestock. Because the animals were coming from five different states, they would have to be housed separately. He also consulted with the wranglers on what arrangements would be made to properly care for these animals throughout filming. The production company spared no expense in providing any necessary veterinary care and excellent general care. Although there was plentiful grazing land, top quality hay was also supplied.

On some specifics of animal action, only trained rearing and falling horses were used for those stunts. For the massive race 750 horses were assembled. Prior to filming the race, American Humane reps closely inspected the entire staging ground for any holes, rocks or other potential hazards. Special breakaway wagons were used for some stunts and only experienced and skilled drivers and stuntmen were used. A spectacular horse fall with a rider on his back was performed by Twister who did his speciality which is a combined rear and tumble. Where riders descend a steep hill into a stream, the hill was made to look steeper than it actually was with camera angles. Although you cannot see it, the hill was step-tiered which made it very easy for the horses to descend. The horses were ridden by stunt riders who doubled for the actors. The water at the bottom was no more than three feet at it's deepest.

When Joseph arrives by train to the race site the only available horses remaining are a placid old horse and a wild ""greenbroke"" horse who is bucking wildly in a corral. The horse bucked in response to a trainer's verbal commands and cues with a lunging whip. The trainer remained just outside camera range and there was never any contact between the whip and the horse. Joseph decides on the safer old horse and hitches him to a rail outside a blacksmith's shop. Later, when Joseph returns, the horse is lying dead of old age still hitched to the rail. Both a real and fake horse were used for this scene. The real horse was sedated briefly by a veterinarian for key camera shots. He was then replaced with a fake horse for longer scenes and other camera angles.

Joseph has no other choice but to ride the greenbroke horse who continues to buck and writhe and throws Joseph to the ground. The horse responded to the same verbal and lunging cues as described above and a stuntman was photo double for the actor in the fall. When the horse will not stand still long enough for Joseph to re-mount, Joseph punches him in the nose and manages to mount and get back in the race. The illusion of a punch was achieved by attaching a wire to the horse's bridle. When the wire was pulled the horse turned his head. The timing was worked out so that the horse turned his head as the actor took his punch and there was never any contact between the horse and the actor's fist. Livestock and dogs can also be seen as part of the settlers encampment.

An unfortunate accident occurred not during any actual filming, but between takes of a scene for the land race. A wagon driver dropped his reins, and lost control of the wagon. The horses took off with the wagon and the driver still sitting in it. The wagon went over a knoll and when it got to the bottom where there was a dip, the head horse mis-stepped and snapped his gannon bone. The break was severe enough that the on-set veterinarian felt it could not be repaired and immediately euthanized the horse by injection. This happened very quickly and the horse did not suffer.

In earlier scenes set in Ireland donkeys are used to pull carts and Joseph rides a donkey when he sets out to avenge his father's death. Birds, chickens and other farm animals can also be seen. A woman holds a dead rat by the tail and tosses it out the front door of a shabby Boston boarding house. (A fake rat was used for this) After her valuables are stolen, Shannon finds work in a poultry processing factory. She plucks the feathers from dead chickens which are then placed into a cauldron. All of the chickens used in this scene were fake rubber chickens with the exception of a few live chickens sitting in a background cage.

All major animal action was filmed in the United States and American Humane representatives were present on the set at all times. Although there were no humane monitors on the set in Ireland, all animal action filmed in Ireland was basically mild. The production company not only met American Humane's Guidelines, but went that extra mile to ensure both the physical and mental well-being of the animals. We are rating Far and Away "Acceptable".