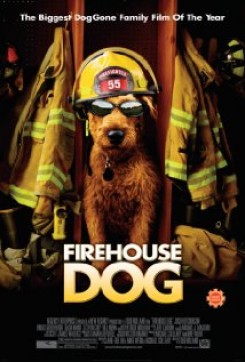 Four Irish terriers were alternated in the role of Rex in this film. Special effects were used to create Rex's free fall from a plane into a truck full of tomatoes. The real dog was then filmed popping up from the pile of tomatoes, covered in sauce. The truck bed had been modified with platforms along both sides and a plywood-covered tunnel down through the middle with a two-foot square hole at one end for the dog to pop through. The entire platform, except for the hole, was covered with 600 pounds of roma tomatoes.

On the trainer's cue, the Irish terrier trotted up the tunnel and popped his head up. To make the truck appear as if it were being driven, unseen crew members jumped up and down on the front bumper and sideboards to shake the truck. The remnants of tomato in Rex's fur were created by mixing tomato paste and a nontoxic make-up product called Action Mud into a Vaseline base.

Rex gets trapped on the roof of a burning building in one scene. Chief Fahey (Bruce Greenwood) stands on an extension ladder and manages to catch the dog when he jumps off the roof. Moments later, Rex drops into a life net held up by firefighters below. Real firefighters were on set during this entire sequence as a safety precaution, and all smoke was water-based and away from the dog.

This sequence was filmed in multiple cuts and with a blue screen for shots of Rex barking on the burning roof. Production built a 25-foot long, 15-foot wide, 10-foot high rooftop set on the studio lot with stunt pads placed around the base to cushion any unscripted landings. One trainer remained offscreen on a table beneath the dog while another handler worked on the set top with Rex. Both the dog and the stuntman who catches Rex prepared extensively for this jump. According to the Safety Representative monitoring the shot, the Irish terrier was jumping to his food bowl on the table below, but the stuntman kept catching him before he got there!

While it looks like Rex hangs off Connor's arm seven stories above the life net, in reality this shot was filmed approximately one foot off the ground. The dog was released by one trainer and encouraged to bite and hang on to the padded sleeve of a costumed handler for a maximum of eight seconds.

The jump to the life net involved both visual effects and live animal action. The real Rex stood on a five-foot-high platform and a trainer cued him to jump into the middle of the life net. Actors held this safety tarp three feet above the ground, which then required only a two-foot vertical jump from the dog. Rex stood in place on the life net for an insert shot, and then the actors lowered the net quickly to simulate the force of the dog's landing.

Once Shane and Connor bring Rex home, there is chaos. In one scene, Rex runs down the hall away from Shane's bedroom, slides into the wall, gets covered with dust bunnies, and winds up in the bathtub expectantly holding a bottle of shampoo in his mouth as he turns on the faucet. Trainers sprinkled talcum powder underneath the hall rug to reduce Rex's traction as he came around the corner. The false wall that he brushed against slightly was flexible and the dog was not bothered by this contact at all. To create dog-friendly dust bunnies, a bit of nontoxic material used to pad furniture cushions was ground up in a coffee grinder and thrown into the air as Rex ran into the bathroom. The Irish terrier sat on an apple box in the bathtub and was cued by a trainer to push down on the faucet; as he did so, a crew member off camera turned on the water.

In another scene, Rex jumps onto a counter in the pantry and reaches up to a high shelf for a bag of beef jerky, knocking over an offscreen wine rack. The wine rack was wired to the wall to allow limited horizontal movement without falling. An unseen trainer moved the rack to make it look like the dog's feet were pushing it over. The dog's path to the counter was clear, and three trainers worked on this shot: one above giving commands and two off camera at ground level to watch out for the dog.

One sequence features a canine agility course. Safety protocols in place for this sequence included having the background crowd mime their cheering and clapping; checking all agility equipment for sturdiness and proper setup; securing all light obstacles; walking the grounds to check for debris and holes; and having all dogs handled by their owners. The ring of fire stage of the course appears to cause Rex great distress, though in reality the dog was well-prepared to work with fire. Trainers placed the ring five feet in front of the platform to discourage the dog from jumping through, and raised it high enough above the ground so that the terrier could go underneath if necessary. The ring of fire was propane-fed and crew stood by to turn off the fuel should Rex attempt to leap through it. The scene ends before Rex decides whether to jump or not.

Rex later skateboards in a parking lot, jumps over a car pulling out of a space, and then lands on the skateboard again. This animal action was filmed in front of a blue screen; no car was ever in the scene with the dog. A trainer guided Rex's skateboard via a wire attached to the board. The dog rode the cabled skateboard up to a table, which he jumped on top of while the board continued its trajectory underneath. When the slow-moving skateboard emerged from under the table, the trainer cued Rex to jump down on it. A non-slip material covered the table to provide traction for the terrier.

The engine company fire scene required careful choreography for the animal, firefighters on site at all times, and a multitude of precautions surrounding the controlled flames and water-based smoke. Flame bars and fire paste were used in the background of all shots, but the dog never came closer than five feet to these devices. Fire paste, a substance frequently used for starting campfires, fireplaces and barbeques, allows productions to create natural-looking, controlled spots of flames without flare-ups or splashing.

Production made sure all pathways the dog would travel were swept clear of debris. Rex was not brought to the set until the controlled fires were burning, and trainers verbally and physically prevented the dog from walking near any fire source. Three hidden trainers on set cued the terrier and acted as safety guards during filming.

The shot of Rex sliding down the pole to rescue Shane combined visual effects mixed with footage of the real dog jumping and landing on a platform to the side of the pole hole. Rex was not in the room during the shots of Shane throwing kitchen utensils to the floor or breaking the door hinges to escape. The glass that Shane and the terrier run over as they exit was harmless candy glass.