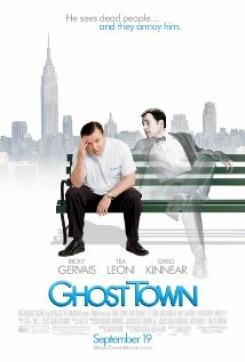 After dying for several minutes and being resuscitated, Bertram Pincus (Ricky Gervais) finds himself able to see and hear dead people. Deceased adulterer Frank (Greg Kinnear) won't leave Pincus alone until Pincus helps break off the engagement of Frank's widow. But things become complicated when Pincus falls for the widow.

A female Great Dane named Jazz played the role of Gwen's (Téa Leoni) dog, Leonard. The cast and crew members were introduced to the dog and instructed on his proper handling before filming began. The grounds were inspected for hazards and the area was secured. In all dog scenes, the trainer stood nearby to cue the dog and retrieve it immediately after filming. For the brief elevator scene, a trainer handed over the dog to the actress moments before filming and then cued the dog to sit and stay.

For the scene in which Leonard sits and stares at Pincus (Ricky Gervais), a trainer placed Jazz on her mark and used hand signals and roast beef to entice her to stay. Her panting and drooling were natural behaviors. All barking was a trained behavior.

For the scene in which Leonard is tied to a parking meter outside of the restaurant, the trainer placed a blanket on the sidewalk and walked Jazz to her mark on top of the blanket. The trainer then secured her leash to the meter and cued her to sit and stay. Trainers inside the restaurant held treats to get the dog's attention as the camera crew inside the restaurant filmed the dog peering into the window.

For the scene in which Gwen gives Leonard a bath and brushes his teeth, two trainers lifted the dog, who was accustomed to being in water, and set her into the tub, which was filled to the dog's shins with warm water. The well-rehearsed actress then lathered Jazz with nontoxic bubbles and lifted up the dog's jowls to brush her teeth. The toothpaste was a pet toothpaste and lard mixture that the dog enjoyed. Off-camera trainers then cued the dog to jump out of the tub and onto a floor rug over several rubber gripper mats for safe footing. The dog was toweled off between takes, which were limited.