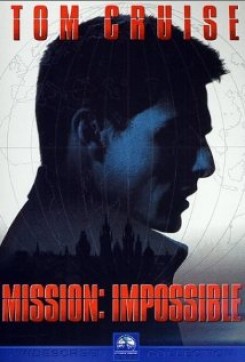 Mission Impossible is a film based on the popular T.V. series about an international spy organization. In this particular story, someone inside the organization has betrayed his fellow covert agents and procured a disc detailing everyone's identity in the organization. A mission involving the information on the disc goes bad, resulting in the deaths of everyone on the team except Ethan Hunt. When Ethan realizes that he is the only survivor from the team, he contacts the home office. The agency, knowing for some time that there was a leak in the organization, starts to believe that Ethan is that leak. They instruct Ethan to meet them at a local restaurant. When the meeting is not going as planned and Ethan recognizes the people working in the restaurant as agents, he decides it is time to make a quick exit. He takes out a piece of gum, which when crumbled up is actually a bomb, and throws it at one of the large aquariums in the restaurant. The aquarium explodes, causing mass confusion, which enables Ethan to escape. Ethan comes to the conclusion that the real covert agent gone bad plans to sell the disc to the highest bidder on the black market. The only alternative left is for Ethan is to go under ground. He recruits other underground agents and devises a plan to steal back the disc and uncover the identity of the real covert operator.

n the scene where Ethan blows up the aquarium in the restaurant, real and fake fish were used. The production company built the aquariums specifically for this scene and hired a company specializing in fish and aquariums to provide all the necessary materials and fish for the tanks. A fish specialist was on site twenty-four hours a day to monitor the fish and care for them. When the explosion occurred, the real fish were replaced with rubber fish. There is a scene where Ethan, along with some other underground agents, are seen breaking into CIA headquarters. They are trying to access the main computer. To do this, Ethan and another agent must crawl through the air ducts to the location of the computer room. Next, Ethan is lowered by a rope from the air-vent in the ceiling. While he is dangling in the air, the agent in the air duct notices a rat walking towards him. Fear of the rat is evident by the look on the mans' face. A thud is heard and we see Ethan start to fall. We assume, that the agent momentarily let go of the rope to kill the rat. The rat is then seen presumably dead lying in the background. The scene was shot in cuts, using a real and a fake rat. For the scene of the rat in the air duct, the trainer merely placed the real rat on his mark for the shot. A fake rat was used when the rat is seen supposedly dead. The actual killing of the rat is never seen