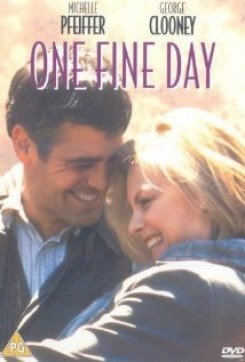 One Fine Day is a film about two single parents Melanie Parker and Jack Taylor. Jack is watching Maggie, his daughter, while his ex-wife is on her honeymoon. Melanie's son, Sammy, goes to school with Maggie and when Jack's ex-wife dropped Maggie off she told Jack that he needed to pick up Sammy for school. Of course Jack forgot to pick him up and when he arrived at school, Jack met a very upset Melanie and her son. Because Jack failed to pick up Sammy and he was late arriving at school with Maggie, both children missed their field trip. Now Melanie and Jack have no one to watch their children and both parents have huge deadlines at work. Therefore, they must come up with a plan of action for the kids. After they have exhausted their individual ideas, they decide to put their differences aside and help each other out by watching each others children. By the end of the day they have fallen hopelessly in love with each other.

A fish bowl with three goldfish is seen throughout the film. The bowl of fish is seen either sitting on a surface, or being carried by various actors. Fake fish were used for all scenes where the actors are seen running with the fish bowl. An expert on the care and welfare of the fish was on present at all times. When Maggie gets lost, Jack finds her in a store playing with a cat and her kittens. In order to get Maggie to leave with him, Jack has to let her have a kitten. Maggie and her kitten are seen throughout the rest of the film. The little girl and her father are seen walking, running through traffic, and petting the kitten. When the little girl is seen running with the kitten, she holds the animal in the same manner that the animal's mother would carry him, by the extra skin around its neck. There are a few scenes where Maggie is seen with another cat in Jack's office. Maggie and the cat are sitting on a credenza next to the fish bowl when the cat is seen sticking his paw into the bowl. Then the cat is later seen licking his paws as if he has supposedly eaten the fish. Maggie and the cat are also seen sitting under the desk playing. The same cat is seen sitting in a desk drawer while Jack's boss pets him and later eating a sandwich. The fish are not visible when the cat is seen sticking his paw into the bowl. After the cat supposedly ate Sammy's goldfish, Jack and Maggie go to a pet store to buy some new fish to take over to Melanie's. Jack is seen attempting to scoop up a fish with a net however, after several failed attempts he sticks his hand in the aquarium. The actor's hand is never seen touching the goldfish and he is not seen taking any out of the aquarium. When Jack gives Melanie the bag containing the fish, she pours the fish and water from the bag into a tall glass pitcher. For this scene, the actor carefully deposited the fish from the bag into the pitcher. Other animal action consists of a dog seen sitting in front of a door inside an apartment.