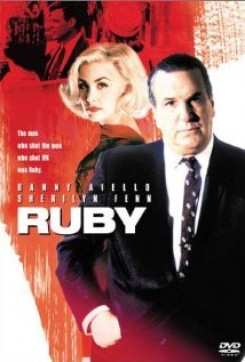 Ruby is a fact based account of Jack Ruby's involvement in the Kennedy assassination and the events surrounding this tragedy. Jack owns a run down, rather sleazy strip joint. With this income and the income of trafficking drugs through some local crooked cops, Jack makes a modest living. One day after he closes the club he goes into the train station for a quick drink where he meets Candy Cane, a woman who has just left her husband and is headed for anywhere that may hold a better life for her. Jack becomes smitten with the woman and takes her under his wing. One evening Jack comes up short for an act in his club and Candy volunteers to dance. She soon becomes his head-lining stripper. One day Jack is approached by a cocky tough guy that is associated with the mafia. The hood offers Jack the "job" of springing Santos, a mafia leader, out of a prison in Cuba. Jack accepts the offer. Once he has smuggled Santos out of Cuba, they return to the States where Jack is praised for the good job he did and is granted his own territory for the mafia. He is now "Mr. Ruby of Texas". Jack is always accompanied by Candy, as Santos finds her very attractive. Santos and the other mafia leaders, with some undetermined involvement with the C.I.A., set up a meeting between Candy and President Kennedy so Candy can spy on the President. When the mafia leaders stop having much more to do with Jack, he begins to realize he has served his purpose by supplying Candy and retrieving Santos. He was only being used for a much larger plan...the assassination of President Kennedy! By the time Jack figures out what is actually intended it is too late. He can do nothing to stop this act. When Jack sees the telecast of the President's shooting, he is beside himself with grief and guilt. He decides to take things into his own hands, and hoping to reveal the truth about the murder, heads for the courthouse to shoot Lee Harvey Oswald, the man that has been arrested for the shooting of the President.

Animal action is minimal. Jack has two dachshunds that are seen as his companions. In one scene Jack holds and pets one of the dogs. They are also seen running, barking, sleeping and eating.