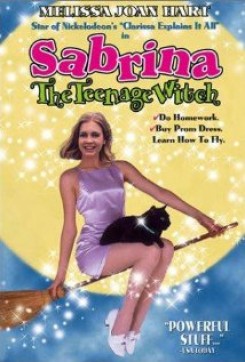 Sabrina the Teenage Witch is a teenage film about a girl who goes to live with two of her aunts and discovers she is a witch. When her parents take a sabbatical, Sabrina goes to live with her aunts and their pet cat, Salem. In so doing, she transfers to a new high school where she is anxious to fit in with the popular clique. On her birthday she is given a mysterious book as a gift which she learns is her text book on witchcraft and her true family legacy. With the help of magic, she foils her jealous competitor and wins several events in the All City Track Meet. Being a winner lands her a date to the Spring Fling with the most popular boy in school, much to the chagrin of her friend, Harvey, who really cares for her. However, through the use of her own intuition and not magic, she discovers that being popular doesn't always mean being honorable and that real friendship can lead to love.

A cat and several dogs are seen in the film. Primarily, we get to know Salem, the talking black cat, who is the companion of Sabrina's aunts and is seen, mostly sitting around, throughout the film. Salem is also seen walking around on everything from the floor to the dining table to the bed. He is sent to inconspicuously accompany Sabrina in several situations. At a pool party, he is seen sitting behind some plants and commenting on the white poodle owned by the residents. The two animals are also seen just standing together in several scenes. These animals were trained together in pre-production and were very comfortable with each other. They were both trained to a buzzer and to vocal and visual commands. In scenes where the animals look as if they are chasing each other, they are merely responding to separate buzzer commands. The editing made it appear as if they were giving chase. In one scene when Sabrina's aunts are demonstrating their magic powers, they turn Salem from a cat into several mice and immediately back into a cat again. This scene was shot in cuts. The cat and the mice never appeared together in the same camera shot. The cat was morphed into mice and the mice were morphed back into a cat by computer in post production. While at the Spring Fling, Sabrina's rival discovers her textbook of spells and threatens to reveal Sabrina as a witch. Sabrina turns her into the white poodle that we had seen earlier at the pool party. Later we see the poodle run into the dance being chased by three other dogs. The poodle runs underneath a table and Sabrina changes it back into the girl. For this scene, the dogs each had a trainer who gave their individual dog his command during the staggered release. Both the camera angle and editing in post production gave the illusion that the dogs were chasing the poodle. Sabrina The Teenage Witch was a Canadian production and American Humane was not on set during filming. However, after conferring with the production company, we are rating the film "Acceptable."