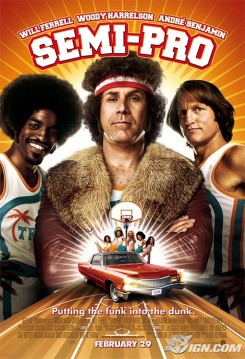 Bear: In the middle of a basketball court, Jackie (Will Ferrell) wrestles a bear inside a raised platform cage, similar to a boxing ring. Anytime the bear is shown next to the actors (Will Ferrell and Andy Richter), it was actually an animatronic bear or a man in a bear suit. A stuntman filled in for Ferrell during any portion of the wrestling scene that used a live bear.
The few cast and crew members who were needed on set were kept a safe distance from the live bear, a remote camera was used, and people in the stands were replaced with mannequins. A “hotline” fence surrounded the platform. Trainers brought the bear actor, named Rocky, to the set and placed him on his mark. The head trainer stood just off-camera and cued Rocky to sit up and stand up whenever the scene called for it. For the portion of the scene in which Jackie throws punches near the bear’s face, the costumed head trainer stood in for the actor and a hotline was placed between the trainer and the bear. The trainer cued the bear to open his mouth and rewarded the bear after each action. When the actor appears to slap the bear’s face, the trainer stood in and pantomimed the slap; he did not actually make contact. Trainers rehearsed with the well-trained bear for several weeks before filming. For the wrestling portion of this scene, the hotline was removed and the bear was cued to mouth the costumed trainer’s wig and shoulder. The head trainer and the bear had a close relationship and were accustomed to this playful wrestling. When the trainer fell to the ground in a choreographed fall, the bear “fell” on top of him and continued his play-wrestling. After the wrestling scene was filmed, the trainer cued the bear to walk down the platform’s stairs and go back to his holding cage, which he did with no hesitation."