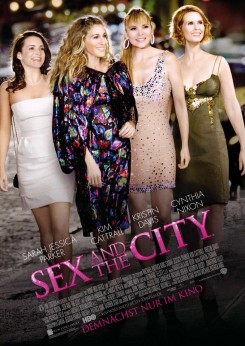 Sex and the City

Four best friends deal with men, careers, fashion, Botox and all the issues that go with being a woman in the 21st century. Carrie (Sarah Jessica Parker), Samantha (Kim Cattrall), Miranda (Cynthia Nixon) and Charlotte (Kristin Davis) rely on each other for support, sisterhood and plenty of gossip.

The Dogs
Throughout the film, Charlotte and Harry’s (Evan Handler) three small dogs are seen. Penny, Mickey and Jesse played the roles of these three dogs. Whenever these dogs are seen performing such mild action as sitting and staying, walkingfrom point A to point B or being petted, trainers cued the well-rehearsed, well-trained dogs with verbal commands, hand signals and treats. The dogs were introduced to each other and were accustomed to each other. They were rewarded with treats, praise and petting and were rested between takes. Before filming began, cast and crew members were introduced to the dogs and were instructed on their proper handling.

When Carrie and Mr. Big (Chris Noth) walk through an apartment lobby near the elevators, a woman walking her dachshund on a leash strolls past them. For this mild and brief action, the dog’s owner and trainer handed the dog to the actress right before filming and retrieved it between takes. The grounds were inspected for safety ahead of time and the action was choreographed in detailed rehearsals before filming.
Due to late notification or limited resources, American Humane did not monitor all of the dog action.