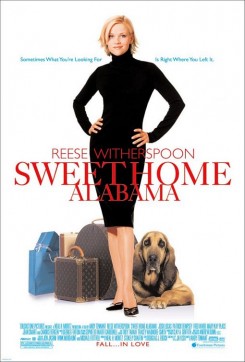 When New York fashionista Melanie Carmichael (Reese Witherspoon) gets engaged to her Kennedy-esque boyfriend Andrew (Patrick Dempsey), her perfect socialite life seems complete. There's just one problem — Melanie's already married to her hometown sweetheart, Jake (Josh Lucas). So before her second trip down the aisle, Melanie takes a trip to her past — namely, Alabama — where she confronts her stubborn husband and falls for a lovable Bloodhound named Bryant.

Jake's canine companion Bryant was played by a Bloodhound named Baron, with two additional hounds, Rufus and Zsa Zsa, on stand-by. Bryant first appears in the film barking at Melanie from his front porch. To accomplish this, trainers placed Baron on his mark and cued him to "stay." From off-camera, the trainers signaled the dog to "speak" and "sit," and rewarded him with plenty of treats. Trainers used similar commands to cue Baron to sit on the porch or lazily lounge around on the couch, activities that Bryant seems to favor most.

When he's not busy napping on the sofa, Bryant enjoys taking a swim in the local lake. In one scene, Jake tosses a bone into the water off of the pier and Bryant eagerly jumps in after it. He retrieves the bone in his mouth and swims back to the shore. To achieve this, a trainer treaded water in the lake while another trainer released Baron from the dock. The trainer already in the water called for the dog to "come" and Baron jumped in and swam to her. The trainer on the dock then called to the dog and he swam back with a bone in his mouth, a treat from the trainer.

Melanie's father is a member of a Civil War re-enactor group, an organization that dramatizes famous battles of the Civil War. In these reenactments, horses are both ridden and hobbled in the background. The scenes were filmed at an actual Civil War reenactment at Georgia International Horse Park. The horses belonged to the actual re-enactors. The film actors were instructed to ride from point A to B, where a handler would take the horse's reins and walk it back to its owner.

At the annual Pigeon Creek Catfish Festival, children line up to pet various animals at a small petting zoo. The animals were provided by a local company that rescues animals in need of a good home. The children were instructed to gently pet the animals during filming.

A messy-looking cat eats some wedding cake near the end of the film. A normally handsome kitty named Trapper was made-up to look disheveled by tying clumps of fur in unsightly spots. The trainer used a buzzer to cue the cat to its mark near the cake, where it proceeded to lick a feline-friendly frosting of salmon-flavored cream cheese.