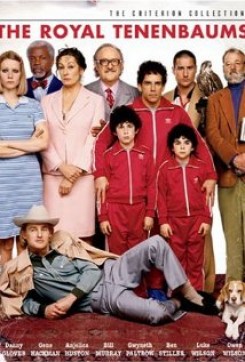 Stricken with a terminal illness, the erstwhile patriarch of a dysfunctional family of overachievers, the Tenenbaums, comes home to make amends after leaving his family many years before. Rounding out this eclectic comedy, Gwyneth Paltrow, Luke Wilson, and Ben Stiller play the genius children of Royal (Gene Hackman) and Etheline Tenenbaum (Anjelica Huston).

Not So Lucky Buckley

Buckley was played by two Red Beagles, Reba, who was 41/2, and Cooper, the slightly senior dog at 5 years old. For their scenes, the trainer would set one of the dogs on its mark and used hand and verbal signals to cue the animals to achieve such action as sitting in a crate, sleeping in the bed, sitting by the poolside, lying in the ambulance with Royal, and walking and playing with the boys.

In one scene, Buckley's leash is tied to playground monkey bars as the kids play. One child takes Buckley by the leash and walks to a fence to talk to Royal, who tells the dog to sit. It obeys. A trainer tied the dog's leash to the monkey bars and stood off camera using hand signals to cue the dog to stay. The young actor untied the dog and walked it over to the fence, where the trainer was standing off camera and cued the dog to sit at the right moment.

Later, Buckley runs alongside Royal and his two grandsons as they ride horseback. Below the camera frame, trainers held the reins of the horses that the young actors rode, while Gene Hackman rode his horse with a trainer nearby to supervise. Stunt riders, doubled as the actors, rode trained jumping horses for the jumping sequence in the ring. For the canine action, a trainer put the dog on its mark and used hand signals from off camera to control the dog's pace.

Buckley also gets to ride in a car. He leans out the window, freely enjoying the breeze. The trainer secured the dog in the car with a safety harness and also hid on the floor of the car to hold the dog in place. Later, two children play outside and tie Buckley's leash to bars on a window. It is soon implied that Buckley has been hit by a speeding car, although the incident is not actually seen on camera. The trainer placed the dog on a verbal command to stay while tied to the bars.

After Buckley's tragic demise, the family adopts Spark Plug the fire dog, played by Taz, a 5 year old Dalmatian. In one scene, a fireman holds the Dalmatian by the leash as Bill Murray pets it. Later, Chas (Stiller) has the dog by the leash as Royal walks up. They both pet the dog and then Chas walks the dog up the stairs into the house.

On a garbage truck excursion, Spark Plug rides with the kids, Chas, and Royal. A special platform was built on the side of the truck and the dog was wearing a harness that was secured to it. The dog rehearsed this scene a number of times and seemed very comfortable with it. The truck was driven by an experienced truck driver and only went a few feet on the closed-off road.

Spark Plug gets in on the action when one of the children on the tennis court gives the dog a tennis ball, which he happily takes in his mouth. His joy is short-lived, however, when later, Spark Plug lies in an ambulance next to Royal. A trainer put the dog on its mark and used a combination of hand signals and verbal commands from off screen to get the dog to achieve the action in all of these scenes.

A mournful Spark Plug attends a funeral. Guns are shot to salute the deceased, and the dog runs off camera. A trainer put the dog on its mark and cued it to stay, then called it off camera where a treat was waiting. The sound of the gunshots were added in later, in post production.

Free as a Falcon

Richie (Wilson) is seen with a falcon in various scenes throughout the film. The first time we see the falcon it is wearing a hood, which is removed and the bird takes flight. In several other scenes, Richie holds the bird or removes its hood and pets it.

In one scene, the falcon lands on a rooftop near Richie. As he moves to get into the elevator, he pets the bird then holds it on his arm. The bird had a tether attached to its leg and its hood on. Luke Wilson spent hours rehearsing with the Falcon and its trainer. The actor was prepped on how to handle the bird as well as how to remove the hood. Trainers carefully dressed the bird and sometimes held up food to get the animal's attention.

Unfortunately, during one of the Falcon's flying sequences, an unforeseen incident occurred when a pigeon flew by the Falcon and distracted it. Being a bird of prey, the Falcon was prompted to fly away after the pigeon. Despite efforts on set to locate the bird that day, it could not be found. Several days later, however, someone found the bird and the bird was returned unharmed to its trainer, who was identified by the Falcon's identification tags. Due to the incident, our AHA rep ensured that in further scenes with the falcon, the bird was on a short tether and not allowed to be flown freely.

To create the Dalmatian mice, trainers applied spots on 36 mice with a non-toxic, washable felt tip pen. A large terrarium was set up as a home to several mice who climb around on the equipment inside. A trainer carefully put twenty-six of the mice into this terrarium and the mice had lots of fun crawling about.

There are a few scenes in the film where a single mouse is shown crawling in various places. Two trainers accompanied the little creatures to the set. These scenes were filmed separately and inserted into the film during post production. A barricade surrounded the set to contain the mice while on the set. A trainer set the mouse on its mark and scattered around bits of food to prompt the mouse to move in certain directions.

In one scene, a man sits on bench with dog sitting by his side. He pets the dog while another dog is seen in the background on leash. At another point, a dog sits by a man playing cards and barks. These were extras in small parts. The trainers put these animals on their marks and stood off camera using hand signals to achieve the action.

During Margot's (Paltrow) play, a Capuchin Monkey sits on the shoulders of one of the actors. A trainer placed the monkey on the actor's shoulders for the short scene, and retrieved it afterwards. Also, during a fake fire drill, a child reaches into a terrarium and takes out a turtle. Later, he holds the turtle as he stands outside. A man also carries the terrarium with the turtle in it through the hotel lobby. The turtle was cared for on set by production and the actors who handled the small animal were cautioned to be gentle.

The various taxidermy animals and furs in this film were purchased by production, as were the dead insects. No live animal was harmed during or directly for the making of this movie.