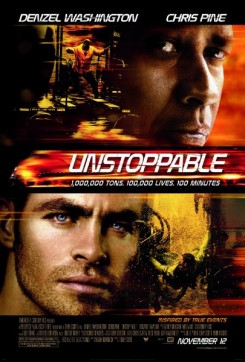 When a miscalculation at a train yard causes an unmanned train containing explosive material to run at high speeds, two rail workers attempt dangerous measures to stop it from derailing in a populated city.

Horses are removed from a horse trailer and held by some train tracks. As the runaway train races down the tracks, it hits the empty horse trailer, while the nearby horses react and rear up. The grounds were checked for hazards ahead of time. All cast and crew members were introduced to the horses and instructed on their handling before filming began. This scene was filmed in separate shots after much rehearsal. One trainer loaded the horses into the trailer while another trainer hid inside and held the horses. As the door to the trailer was opened, a costumed trainer safely removed the horses, handing one over to an actress. Trainers cued the horses to act excited and rear up. The horses were removed from the set before the train hit the trailer -- the horses were never around the moving train or the collision.