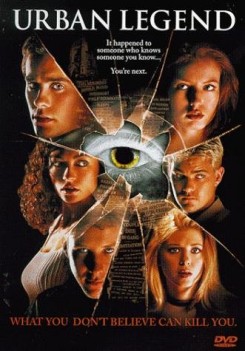 Urban Legend is the tale of a serial killer. Animal lovers will indeed be horrified by the use of a microwave as the murder weapon used in the demise of a canine mascot.

The “Link” between Animal Abuse and Human Violence

The film Urban Legend, incorporates an illustration of the relationship between animal cruelty and human violence. In this tale about a serial killer, there is a scene in which one of the characters finds that his dog has been murdered in a microwave. No live animals were harmed in the making of the film and the grizzly death is alluded to using fake blood only. See complete review…

In real life, the history of serial killers reveals all too vividly that many of them began their horrific careers by abusing animals. Examples  of this are Ted Bundy and Jeffrey Dahmer who both, as youngsters, mutilated and killed animals. The abuse of animals in real life is a disturbing fact that should not be taken lightly. AHA has been in the forefront of researching this issue and considers the “Link” between animal abuse and human violence is one that deserves serious consideration.

Urban Legend is a film about a serial killer at a University. His methods of murder are "copy cat crimes", based on certain urban legends.

Later that night, the killer alerts Parker to the fact that Hootie is in the microwave. Parker enters the kitchen and opens the microwave supposedly finding Hootie’s exploded remains inside. The camera angle only allows the viewer to see fake blood dripping from the door and Parker’s horrified expression. At no time was a live animal put in harms way.