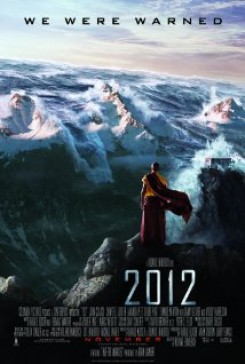 When Jackson Curtis (John Cusack) discovers that a conspiracy theorist's predictions of global destruction are about to come true, he takes his ex-wife (Amanda Peet) and their two kids and tries to escape to a special government-designed ship in hopes of surviving the catastrophe.

In this film, a Russian mobster's girlfriend, Tamara (Beatrice Rosen), has a pet dog named Caesar. In some scenes, she or the mobster's son holds the dog while sitting in a non-moving car, standing, walking or running around. Two Japanese Chin dogs were alternated in the role of Caesar. Actors were introduced to the dogs and instructed on their proper handling before filming began. The dogs and the people who would be holding them were given ample time to become comfortable with each other, and the dogs enjoyed the affection of being held. Trainers handed a dog to an actor right before filming and stood nearby as a precaution. For scenes in which Caesar barks, trainers cued this behavior. Trainers also cued the dogs to stay in the couple of scenes in which they were not being held, including the scene in which the dog lies on the hotel bed.

In a couple of scenes, while Tamara or her boyfriend's son holds Caesar on a cargo airplane or on the Ark ship, the plane or ship shakes. For these scenes, crew members rocked the specially-rigged floor of the set.

In one scene, Caesar walks along the edge of a loading dock, jumps onto a large, thick cable, runs the length of the cable and then jumps into Tamara's arms at a doorway of a ship. This scene was filmed in separate shots. The dog was placed on the fake prop cable, which was made of a firm material with good traction and was only two feet above the ground. Stunt pads were placed below as a precaution. A trainer placed the dog on the ground and cued it to jump onto the cable while another trainer stood near the center of the cable and cued the dog to come. The awaiting trainer retrieved the dog, gave him a treat and a rest, and then placed him on the mid-point of the cable, cuing him to run the rest of the distance to the awaiting actress, who was well-rehearsed on scooping up the dog.

For the scenes involving the rising water in the room of the ship, the dogs and actors were well-rehearsed and the water was warmed before filming. Tamara holds Caesar, who is now wet, and then as the water rises, she tosses Caesar into the water. She then scoops him up and tosses him over a moving gate as it is closing. Jackson's daughter now holds Caesar, who is very wet. This scene was filmed in separate shots. The dogs were accustomed to swimming and were avid swimmers. The actress had choreographed the tossing sequence ahead of time and used caution in making sure to gently handle the dog. A crew member controlled the rigged gate, as not to risk closing it near the dog. Each dog was only in the water for a few seconds for each take, and takes were limited. The dogs were dried and rested between scenes.

In a montage scene, several policeman riding horses try to control the crowds at the London 2012 Olympics.

The horses simply walked back and forth in the background, guided by their owners (who were experienced riders), and never came into contact with the cast or crew. All grounds were checked for hazards ahead of time. Most of the horses had leg guards and face shields, which they were accustomed to wearing.

The solitary deer shown in Yellowstone Canyon was a trained deer. Trainers brought the deer to the set for this brief scene and cued it to stay, using food rewards. No cast members were around and the number of crew members was limited.

Goats and chickens walk in the background as a woman grabs a chicken and sets it on a chopping block. She places a knife up to its neck and then raises it. The camera cuts away right as she is lowering the knife; the actual killing is unseen. Trainers placed goats and chickens on their marks and scattered feed on the ground. The actress was instructed on the handling of the chicken before filming began. The prop knife never actually touched the chicken, and thanks to the editing, viewers are lead to think the woman kills the chicken. It was returned safely to its crate.

American Humane also monitored chickens in a crate in a moving truck, water buffalo walking in the rain and police dogs barking and growling during the London Olympics scene. This footage was cut from the theatrical release but might appear on the DVD.