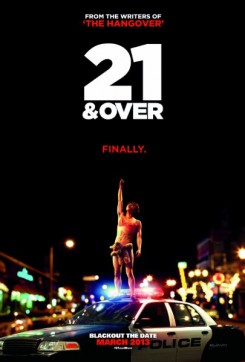 The night before he takes his big medical school exam, a student makes the mistake of celebrating his 21st birthday with two of his best friends.

In a comedy about a young tyke turning the big twenty-one and all the mayhem that ensues in the course of that evening, you would expect to see a buffalo in the movie. Of course! So did the American Humane Association, which is why we were on set for every scene involving animals in 21 and Over, and I can tell you no twenty-one year olds (or animals) were harmed in the making of this hilarious movie in the tradition of American Pie.
The scene that most clearly comes to mind in this romp is when we see a buffalo at a high school pep rally; an actor shoots a gun in the air, startling the buffalo, causing him to run into the crowd, hitting lots of people, including the pep leader. This scene was accomplished in various ways. Trainers first led the buffalo into the area before filming so he could adjust to the action around him.  Production then set up 6 livestock panels creating an alley where the buffalo could run through the crowd without actually touching anyone. Extras stood outside the panel, pantomiming being hit by the buffalo as he ran past them. Trainers used verbal cues and food to get buffalo to run from point A to point B. He ended up in livestock trailer at the end of the panel, where he was given food and water. Several overhead and pov shots were taken of the buffalo running through the panel, giving the image that he’s running through the crowd.
Later when we see the buffalo stand in the middle of the street, trainers merely led the buffalo to the middle of the street with a lead rope, took it off and left him there. They placed grass around him where he ate and grazed at will. Trainers were just off camera making sure he remained still.
The dog walking across the empty street was caught in its natural habitat.