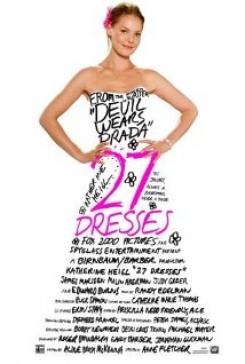 Jane (Katherine Heigl) is a hopeless romantic whose single life is rubbed in her face every time she serves as a bridesmaid -- 27 times and counting. But when her sister announces she's getting married to a man Jane secretly loves, this perpetual bridesmaid must decide if she should support her sister.

Inside a restaurant, George (Edward Burns) whistles. His dog walks into the room and stops in front of George, who takes a ring box off the dog's collar. The dog then exits. For this brief and mild action, a trainer walked the dog to the indoor stage and attached the ring box to its collar using nontoxic prop glue. Upon the actor whistling, an off-camera trainer standing near the actor cued the dog to come, stand and stay, and then called the dog to exit the scene.

Several people in a bridal party are on horseback posing for a wedding photo. Jane's (Katherine Heigl) horse walks across the screen in front of the other, stationary horses. Before filming began, the actors were introduced to the animals and were instructed on proper handling, mounting and basic horsemanship. For this brief and mild scene, trainers positioned the stationary horses and riders next to each other and stunt coordinators stood just off-camera. Trainers then instructed Heigl and her horse to trot the short distance across the grassy arena. The stationary horse with both the bride and groom mounted on its back was a large, muscular horse accustomed to carrying that much weight.

27 Dresses does not carry the "American Humane monitored the animal action" disclaimer at the end of the film because the production did not give American Humane a pre-release screening of the film, which is one of the requirements for issuing the disclaimer.