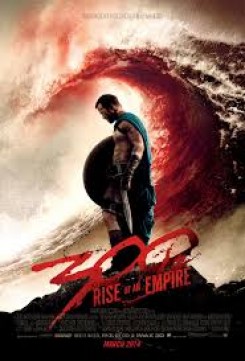 In this sequel to the incredibly popular 300, this time Greek general Theistocles battles the invading Persians driven by the evil, Xerxes.

All horseback riders were stunt riders or experienced actors who were skilled at riding, mounting and dismounting. All running/galloping scenes were well choreographed, and actors used caution while on and near animals. The horse(s) rearing was a trained behavior.

After the opening battle scene, we see men on horseback retreating and a horse is seen stomping on a soldier. For this scene, the trainer stood off-camera, then cued the horse to rear back, then stomp on the ground.  The scene was filmed in front of a green screen, so we assume that the soldier was created in post-production.

For some of the horseback riding scenes (including the horse on the ship), the elephant walking in the background and the crow pecking, these were all done in post-production through CGI.