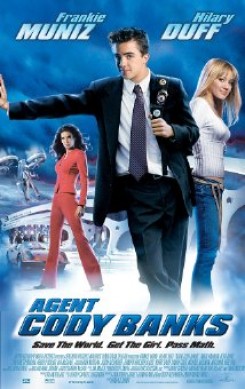 Frankie Muniz plays Cody Banks who seems like a typical teenager. He loves to skateboard, hates math, and feels uncomfortable around girls. But Cody isn't your typical teenager, he's actually an undercover agent for the CIA. Cody's first mission is to become the boyfriend of high school dream girl Natalie Connors, played by Hilary Duff, in order to spy on her scientist father. Cody has to use all his secret agent training to save the world...and maybe get a date.

The part of Cody's pet pooch, Marvin, was played by a Terrier-mix dog named Bosco. Another Terrier-mix dog name Scruffy was on call for the part too. There are a few scenes where the dog is shown in the background lying down. The trainer put the dog on its mark and stood off camera. The dog as you can see in the film, was happy to oblige. In fact if you look closely you might be able to see the dog catching a nap as the humans worked to perfect the scene!

Marvin helps himself to some bacon on the table as mom reminds Cody of his chores. A trainer secured two apple crates by the table and hid behind them as the dog sat on top, eating some turkey bacon. The trainer then guided the dog down off the crates and off camera.

Cody walks Marvin on a leash in one scene and they come across a van with some CIA agents inside. Cody hands the leash to one of the agents and gets inside the van to talk to another. It appears as if the dog is pulling the agent as it tries to walk. Then Marvin lifts his leg and relieves himself on the agent. When Cody returns, he takes the leash and walks away with Marvin at his side. The trainer handed the actor the leash and the dog walked alongside him with no problem. One actor hands the leash to the other and walks behind the van. The trainer stood off camera and called to the dog who begins to walk in that direction. The actor pretended that the dog is pulling him. The trainer verbally cued the dog to lift its leg by the actor's leg. A lightweight plastic tube was attached to the dog with a piece of elastic. Some colored water was syringed into the tube by a crewmember off camera.

As Cody's house is being cleaned by some CIA agents, Marvin is being followed down the hallway by a vacuum cleaner and then a floor polisher. The trainer put the dog on its mark and another trainer stood at the end of the hall holding up the dog's favorite squeaky toy. The dog ran towards the toy ignoring the appliance that was behind him.

As Dr. Brinkman exits a boat, he passes some ducks sitting on the grass. He kicks a duck up into the air and feathers fly everywhere. A Hovercraft that is on the water behind the ducks starts up and drives a few feet where it stops so the actors can exit. Several ducks were placed on the grass inside a puppy pen. The trainers scattered food all over the area to keep the ducks on their mark. The playpen was removed right before the camera rolled and several trainers stood off camera in case any ducks decided to leave their marks. A fake duck made by the props department was placed in the foreground. This made it safer for the live ducks when the actor performed the enthusiastic kick.

When the CIA comes to clean Cody's house, three agents are shown fumigating the guinea pigs cage. Two male Guinea pigs were used for this scene. The trainers made up the cage that housed the animals in Cody's room. The two actors gently lift the guinea pigs out of the cage and hold them off camera while another actor sprays some smoke into the cage. The agents return to inspect the cages and then return the animals. Trainers inspected the cages to make sure the cages were clean and the smoke was gone and then the actors returned the guinea pigs to the cages.

A lady walking a dog on a leash can be seen in the background as Cody and Rhonica drive up to the club for a party. A trainer gave the actress the dog's leash and then stood off camera.