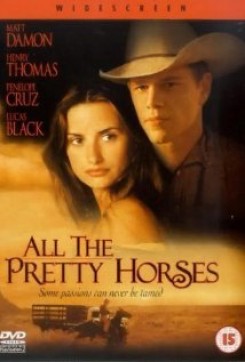 All The Pretty Horses

Matt Damon stars as John Grady Cole, a young Texan who struggles for both life and love in a rough and tumble world bent on defeating his cowboy ethics. Set in post-war 1940s, the film focuses on Cole's experiences as a horse wrangler on a Mexican ranch—including a forbidden romance with the farmer's daughter Alejandra, played by Penelope Cruz.

The Running of the Horses

The opening sequence in the film is shot in the dark and shows many horses running at a high speed, passing the camera frame and out of the shot. For this scene, called "The Running of the Horses," 50 horses were put in pen A and when released, were cued to run to pen B, approximately a quarter of a mile away. After reaching pen B, the horses were walked and cooled down and given an hour to rest between takes (there were 3 takes total). The running area was fenced in and wranglers on horseback controlled the horses at all times.

About to embark on the adventure of a lifetime, Cole and two pals cross the Rio Grande River on horseback and enter into Mexico. Their riders fervent and impatient, the horses slosh through the shallow waters and reach the other side without a hitch. To prepare for the scene, trainers scoured the shallow river bottom for obstructions and debris, clearing the clean and clear water of any possible safety hazards for the animals. The bottom of the river was a concrete-like flat base—not slippery—and was free of mud or muck. Stuntmen rode the 3 horses in the scene, which begins with a point-of-view shot of the cast members on horseback before the river-crossing.

Ninety-nine heads of steer were driven by 15 wranglers and 2 cast members during the cattle herding sequence. The steer were controlled by the wranglers at all times. Another one of Cole's cowboy duties is branding a calf. The metal brand was actually a replica with a battery-controlled smoke device installed to simulate the smoke emitted when the "hot" metal contacts the calf's skin. The hissing noise was a sound effect added in post- production.

Cole's opportunity to prove his aptitude as a horse wrangler involves "breaking" or taming several wild horses captured by the Mexican farmers. The wild horses run around chaotically in an enclosure while Cole lassoes one out of the crowd and ties it to a hitch in the center of round pen. Here, he attempts to stabilize the frightened and angry animal as it severely bucks, rears, and kicks to defeat Cole's efforts. For this scene, 15 horses were put into a holding corral, 5 of which were trained to rear, stop, and run on cue. A trainer hid off-camera cueing the bucking horse to execute different stunts. The 5 rearing horses were only ridden by experienced trainers and stuntmen, and were rotated throughout the filming of the scene to prevent overexertion or exhaustion. The more severe bucking sequences were simulated on a mechanical bull and seamlessly edited with the live horse action.

All gunfire was shot at least 50 yards from any animal and guns were only filled with quarter-loads (of gunpowder), reducing the noise level and percussion of the shots. Wranglers hid behind rocks watching the horses carefully, ensuring that they were not bothered or spooked by the noise.