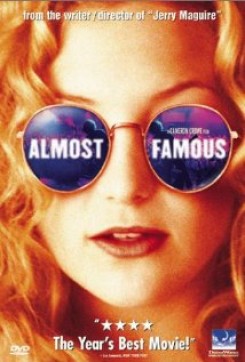 The interesting thing about this comedy that follows an Almost Famous rock band in the 1970's is that the animal actors who were used in the film are Almost Featured - but not!

Just as many actors lament that their best work ends up on the cutting room floor, so it goes for the animal actors in this film. There was one day on set when two adorable pet hamsters, Tabatha and Grace, waited for their big scene in their own portable green rooms. Alas, like disappointed groupies, they waited in the wings, never getting their moment to bask in the shadow of celebrity.

But then, pity the snakes. A snake is at least mentioned prominently in one spate of dialogue, but never is given a chance to fulfill that promise. Five slithering extras cooled their heels off-stage and never were selected to actually glide before the camera. The professional handler, much like an animal casting director, had five different snakes waiting for production's call to action. Burmese Python, Red Tailed Boa, Ball Python, Corn Snake and King Snake all went the route of Kevin Costner in The Big Chill. Cast, mentioned and, ultimately, unseen. With any luck, one of them may go on to direct.

Then there were the goldfish. They at least made it on camera swimming in their lovely bowl. Sadly, their film careers are now floundering on the cutting room floor.

So why do we mention this?

The procedure AHA uses to monitor animals in film includes a lot of work for the Film and Television Unit. The film-going public is not aware of this behind-the-scenes work. When AHA's production office first receives notice that a project is using animals, the office staff begins to compile information on the production.

The script is received and the animal action is analyzed to determine if the action is mild, moderate or intense. For example, if a cat walks A to B, the action is mild. If the cat runs A to B while being chased by a dog, the action is moderate, assuming they are professionally trained animals. If the cat is chased A to B through a room that is on fire, that's intense! AHA then discusses how this will be accomplished with the production staff, the director and the professional animal trainer. Of course, many other factors are considered in the initial evaluation of the action such as pertinent AHA Guidelines, species, location, interaction with actors, etc.

During the course of filming, AHA's production staff monitors the work schedule for the animals and sends a trained Field Representative to the set to be there as the animals' safety representative. Very often AHA monitors pre-production training sessions as well. The Field Reports and other documentation relating to the animal actors is recorded in the production file. It is important that the Guidelines for the Safety of All Animals in Filmed Media are considered and followed.

After filming is wrapped, the film is edited and AHA screens the final cut to make sure we were aware of all the animal action in the film and to analyze how the action appears on screen. If anything looks alarming, we want to discuss it in our review. This screening plus the documentation will determine whether or not the film will receive the AHA disclaimer that states "no animal was harmed...."

AHA's post production team writes a review and issues a rating for the film. What if a film doesn't receive a Disclaimer? See the FAQ section of our website for information on this subject .

Now multiply the hours of time and effort that go into each production by approximately 800. That is roughly how many projects AHA monitors yearly. So if the animals get cut, that doesn't mean no animals were called to work. AHA's mission is to assure their humane care whether they appear on the silver screen or not.