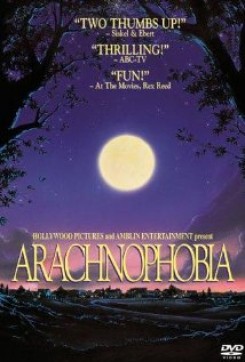 A new species of spider is discovered during a scientific expedition into a Venezuelan jungle. The spider is enormous and deadly. It kills one of the members of the expedition then hitches a ride to the United States via the victim's coffin. Once in the U.S., the spider sets up housekeeping in the barn of Dr. Ross Jennings, a man who suffers from arachnophobia, (an acute fear of spiders). The spider mates and begins a new species which rapidly multiply and spread to surrounding houses where people begin dying

The production company took extraordinary precautions to assure that no animal or insect was harmed. Fake dried and mechanical spiders were used throughout the filming. The live spiders were housed separately in a temperature-controlled area. Since spiders can't be trained, an entomologist devised other means to guide the spiders such as vibrating wires (they wouldn't cross over them), and Lemon Pledge Furniture Wax which the spiders refused to walk on. The spider wranglers worked with the actors on how to handle the spiders so as not to mishandle or mistreat them.

Actors can show their feelings by way of facial expressions, but in order to show the spiders' feelings on camera, they had to make use of the spiders' natural movements and posture. Camera angles were also used to make the spiders appear more frightening.

In several scenes where a spider is stepped on or a book falls on a spider, a hole cushioned with foam rubber was carved in the shoe or book allowing space to protect the spider. The scenes were then shot in cuts and edited. In a scene where a raven flies off with the spider in his beak, a fake spider was used. When the raven falls dead from the sky, the scene was shot in cuts so that what you see falling is a fake raven. The dead raven on the ground is fake. When the scientists collect insect specimens in giant funnels, the insects are a mixture of fake and dried insects that were already dead.

The dead animals that you see in the spider's webb in various scenes, are all fake. A white mouse that is supposedly injected with spider venom and dies off camera was not actually injected. (The needle was retractable). When the exterminator sprays insecticide, it is just plain water being sprayed. That scene and the scene in the shower were shot in cuts taking great care not to get the spiders too wet. When the spider goes down the drain, it is a fake drain and the spider is quickly removed from the water. Of course, the giant spider was mechanical and it's the mechanical and fake spiders that are electrocuted and burned.