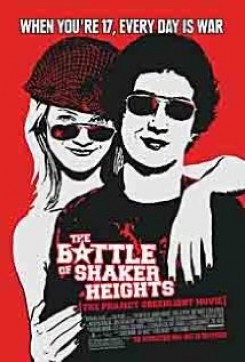 Battle of Shaker Heights, The

In The Battle of Shaker Heights, seventeen year-old Kelly Ensweiler (Shia LeBeouf) combats rather than confronts his problems — he is a war re-enactor/enthusiast who takes out his frustrations with his family and friends by participating in staged battles with fake rifles and contained explosives. He meets a kindred spirit in Bart Bowland (Elden Henson), another re-enactor, but it is Bart's older sister Tabby (Amy Smart) that ultimately captures Kelly's attention.

A grazing deer makes a brief appearance in the opening sequence of the film.

In the opening scene, a deer stands grazing in the woods and looks up at the sudden sound of gunfire and explosions. A 10 year-old female deer named Molo is featured in this scene. Trainers walked Molo around the set to acclimate her to the environment and scattered feed on the ground near her mark to simulate the grazing. Trainers kept Molo on a leash while they placed her on her mark, releasing her to stand on her own when the cameras started to roll. The actors were positioned approximately 15 feet behind the animal, and all explosives were detonated over 50 feet away, ensuring the safety of the deer.

Bart carries a small dog outside in his back yard and places him on the grass. The actor briefly held the dog and gently set him down.