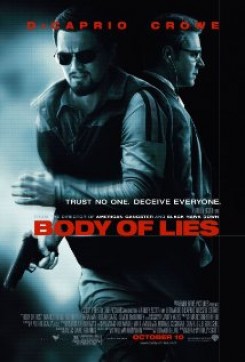 The CIA sends an agent, Roger Ferris (Leonardo DiCaprio), to Jordan to track a terrorist.

Dogs Police with search dogs on leashes begin to search outside a house for a terrorist as a helicopter flies above. The actors were introduced to the dogs and instructed on their proper handling before filming began. Trainers handed the dogs to the actors right before filming and stood just off-camera. The helicopter was kept far enough away so that it did not startle the dogs. All grounds were checked for safety ahead of time. In one brief scene, Ed (Russell Crowe) sits on a chair and talks on the phone while petting a dog. A trainer placed the dog on its mark, cued it to stay and then stood nearby to retrieve the dog afterward. The dog and actor were introduced to each other and given time to become familiar with each other before filming began. Due to insufficient notification and filming outside the United States, American Humane was unable to supervise several animal scenes. Warner Bros. did provide a pre-release screening of the film, but since American Humane did not monitor a significant amount of the animal action, the film earned a Not Monitored rating.