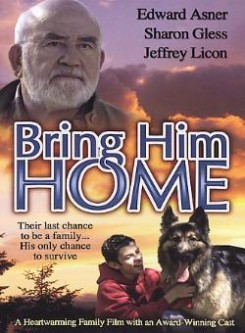 Ricky is a young boy whose best friend is a German Shepherd named Buddy. When Buddy turns up missing one day, Ricky goes to the pound to find him and discovers that Buddy has been sold to a research laboratory. With the help of his grandfather, Ricky rescues his best friend, and all is well.

A Los Angeles City Shelter and an Animal Compound - owned by the trainer who coordinated the animal action - were used as the City Pound and The Research Laboratory in the film. The animals shown in cages during the scenes at the pound actually lived at the shelter, and it was the first time many of them had ever been on film! For health and safety reasons, only one dog at a time was allowed out of a cage in the shelter. When Buddy was out of his cage, he was always on a leash held by an actor, and the trainer stood just off camera. The entire staff at the shelter, which included three veterinarians, was also present during filming.

Buddy was played by a long haired German Shepherd named Bear. It took only six days to film the scenes with Bear. When Buddy was introduced to the young actor who played Ricky, the two became instant "buddies!" Most of Buddy's actions were accomplished with a combination of verbal cues and hand signals from the trainer off camera.

There are two scenes where Buddy is shown inside the back of a van wearing a muzzle. The first time we see Buddy in this predicament, he's taken out by a safety device used by animal control agents. The dog is led to another van and put into the back. The trainer put the muzzle on the dog just before filming began and placed the dog in the back of the van. The trainer controlled the dog with hand signals while the actor placed the device around the dog's neck and transferred the canine into the back of another van. Later, as Buddy sits in the back of this van wearing a muzzle, another dog is also put inside. The trainer again placed the muzzle on Buddy and put him on his mark inside the van. Using a leash, the actor merely walked the other dog to the van and put him inside. The trainer stood just off camera using hand signals and retrieved both dogs afterwards.

Moments before Buddy is rescued, we see him being wheeled into an operating room, wearing a muzzle and subsequently hooked up to a machine. The trainer placed the muzzle on the dog, and also placed him on the gurney. The trainer used verbal commands throughout the scene and sound effects were added in post production. For the scene, the trainer loosely wrapped Buddy's paw with a gauze pad and ran a tube from the pad to the machine.

In another scene, Ricky holds Buddy by the collar as the dog barks and growls at a character named Casey. Buddy pulls away and runs to Casey and it appears as though Buddy is attacking him. In reality, the trainer stood off camera using verbal cues to signal the dog to run to Casey and bark and growl. The actor then walked Buddy over to the trainer waiting off screen.