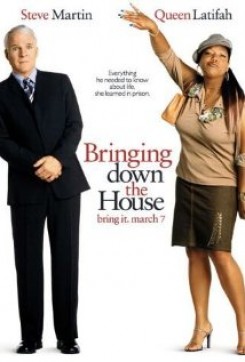 Bringing Down The House

Steve Martin plays a divorcee, Peter Sanderson, who spends lots of time on the Internet. He meets a woman in a legal chat room and they seem to have lots in common. His interest in her grows after receiving a picture of her. Soon the two meet and he is in for a big surprise. She is not the woman in the picture, but a woman on parole named Charlene Morton, played by Queen Latifah.

A French bulldog named Linus played the part of Shakespeare. Linus was last seen in the film "Just Married." The cast and crew in both films fell instantly in love with the adorable bulldog. On the last day of shooting this film, the director was on the ground rolling with the dog in between takes. Everyone was very sad to see it end, knowing they wouldn't see Linus again. Linus loved the attention and the chance to appear in another film where he upstaged the actors. It is hard to look at anything else on the screen when Linus appears on the screen.

The collar that Linus wears in the film was specially made for him and didn't seem to bother him at all. In fact very little seemed to bother this bulldog. Maybe that's why he seems to work as much as Julianne Moore or John C. Reilly. Since everyone paid so much attention to Linus, the dog felt very comfortable with all the humans involved with this production. For the scenes where Mrs. Arness carried or walked the dog, a trainer handed the actress the dog right before filming began and retrieved the dog afterwards. Linus was very comfortable sitting on a chair at a table in a few scenes. In two scenes where Shakespeare sits with Mrs. Arness, he growls and snaps at Peter when he tries to pet the dog. The trainer placed the dog on the chair and then stood off camera and verbally cued the dog to snap and growl. It's hard to believe this dog could appear so mean, During the scene where Charlene poses as the house keeper and serves dinner to Peter's family and Mrs. Arness and Shakespeare. The dog was very comfortable sitting and nibbling on the salad in front of him. Charlene served the salad and the dog tasted it but preferred cut up hot dogs, which were hidden in the salad. The trainer walked around off camera during this scene to get the dog to look in various directions. At the end of the scene, Linus jumped off the chair and runs off camera. The dog was verbally cued the dog to jump down and run off camera to the awaiting trainer.

Charlene calls her friend Howie to help her kidnap Shakespeare to get Mrs. Arness to cooperate. Howie is shown holding the dog in his arms. Shakespeare has a bone gag in his mouth and his paws are tied together with scarves. The gag was made by the trainer out of a scarf attached to a nyla-bone with Velcro. The trainer also used scarves to loosely tie the dogs' legs to make it appear as if the dog was bound and gagged. As you can see on the screen, the dog didn't seem to mind at all. Howie hands the dog to Mrs. Arness. Pete takes the dog from her. The dog was comfortable in everyone's arms.

Mrs. Arness and Peter go golfing in one scene and Shakespeare is at Mrs. Arness' side on a leash, wearing a visor. The trainer put the visor on the dog right before the director yelled,"action" and then handed the leash to the actress. The trainer stood off camera and walked around getting the dog to look in different directions. The dog lies on Mrs. Arness' lap as they ride with Peter around the course in a golf cart. A trainer put the dog in the cart next to Mrs. Arness and then ran alongside the cart as it slowly drove around. As you can tell on the screen, the dog was very comfortable in this scene.

Mrs. Arness comes to Peter's house and his children, George and Sara pet and play with Shakespeare as the two adults talk. The dog and kids played naturally but they both had some treats in their pockets just in case Shakespeare had to be coaxed.

Mrs. Arness enters a limo and Shakespeare is seated next to her. The car drives off. The trainer stood off camera and the car pulled away. The dog is used to riding in cars and was very content.