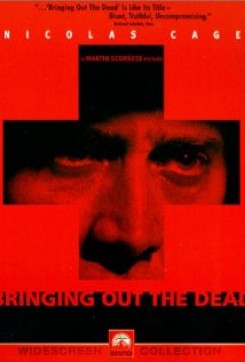 Bringing Out The Dead

Bringing Out The Dead is a story about Frank Pierce, an ambulance driver in New York City and how he deals with every day life in his line of work.

There is a scene in a drug house called the Oasis where an aquarium is seen in the background. Later, at the same location the police arrive and the fish are lying on the floor of the apartment flopping around after an apparent shooting. For this scene, live fish and dead were used. The live fish were placed on the floor by the trainer for approximately 24 to 30 seconds and then immediately placed in a bucket of water. The dead fish were rigged with a device containing compressed air which, when activated made the fish wiggle and flop around on the floor. Other animal action consists of a horse walking a few feet A to B in a homeless community, several dogs A to B on leashes on the street, a homeless man holding a dog, and a dog licking Frank's face in a friends apartment. For all of theses scenes the trainer or wrangler placed the animal on his mark and cued him with a food or verbal/hand commands.