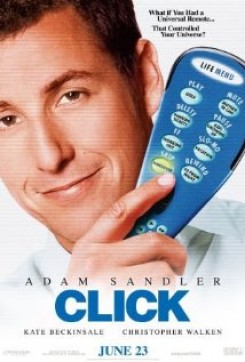 Architect Michael Newman (Adam Sandler) has a hard time juggling work and the needs of his wife and two small children. When he receives a magical remote control that allows him to fast forward, pause, and rewind his life at will, Michael is ecstatic to finally get a handle on his multiple responsibilities. Ultimately, though, Michael discovers that this time-management device may be robbing him of the true joys in life.

One of the film's running gags is of the family dog, Sundance, and his constant desire to "get it on" with a large, plush, toy duck. A golden retriever was trained to perform this amorous action with a simple verbal cue from his handler, and the duck was weighted so it wouldn't slide around while being wooed. When Michael fast-forwards through Sundance's moves and suddenly hits stop, the dog collapses on his side. This was achieved by speeding up the film and with a verbal cue to "roll over" from the trainer.

A Papillon named Peanut becomes the Newman's new pet, and it seems this dog has inherited the duck-loving habits of his predecessor. This action was filmed in front of a green screen with the trainer wearing a green body suit so he could be digitally erased later. The handler positioned Peanut's front legs on the duck and moved the dog's backside while a production assistant used a clicker to get the dog to look at the camera.

In one scene, Michael chases Peanut because he has a Twinkie in his mouth; the audience sees only the actor's legs chasing after the dog. For this shot, the trainer stood in for the actor and cued Peanut to grab the Twinkie and then pretended to run after him. According to the Safety Representative monitoring the scene, the Papillon loved this game.

The third family dog, an Irish wolfhound mix, sits in a beanbag chair with the stuffed duck on top of him in one shot. Rowdy the wolfhound was trained to lie on his back in the beanbag and hold the plush toy with his front legs. This time, though, there were strings attached; above frame, a crew member acted as puppeteer to make the stuffed animal move.

When Michael's fight with Donna (Kate Beckinsale) escalates, the wolfhound jumps on the man and knocks him over a lawn chair. The trainer cued Rowdy to put his feet up on a stunt man in a fat suit, who then falls to the ground.

Later, Michael brings home a bulldog for Sundance, thinking a new love interest will replace his desire for the duck. But no...they both love the duck! This shot required a split screen and each dog was filmed separately. The trainer hid food in the duck's bill and sent the bulldog in to find it. The footage of mutual loving was edited together in post production.