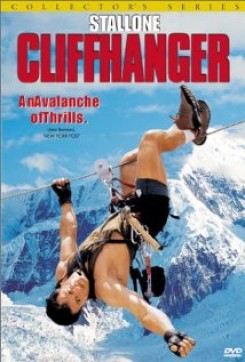 Cliffhanger is an action-packed suspenseful story of a rescue team in the Colorado mountains and how they become involved with some crooked goings on in the Treasury Department. Gabe, Jesse, Hal and Frank are expert mountain climbers who work for the Colorado Mountain Rescue Team. One day Hal and his girlfriend go for a recreational climb and Hal injures his leg. Gabe and Jesse go to the couple's aide on this routine rescue. Unfortunately, Hal's girlfriend's safety line leading to the helicopter becomes loose and Gabe must swing out on the cable to help her. He grabs the woman's arm, but she slips out of his grasp and plummets 4,000 feet to her death. Riddled with guilt, Gabe decides he must leave the rescue team. One year later Gabe returns to Colorado and asks Jesse to go off with him, as he loves her. She declines, saying that he should stay and work out his feelings of guilt. In the meantime, an emergency rescue call comes in and Jesse convinces Gabe that he must stay and assist Hal with this very dangerous rescue. He agrees but, little do any of them know that this rescue may end up being their own. The group they are about to rescue is that of Eric Quailan and his men, six killers and thieves, who have crashed their plane after hi-jacking a Treasury Department shipment of 100,000,000 in unmarked currency. The unknowing rescue team must now fight the elements to save these people and also fight to keep their own lives.

n one scene as Gabe and Jesse are trying to escape from the killers, they enter a cave full of bats. Julie screams and the bats all take off, flying all around the cave and exiting. One of the bats flies down and bites Gabe on the hand. Gabe shakes his hand from side to side until the bat releases his grip, falling out of camera view. In another scene a young boy has parachuted off of a cliff, but not before being shot in the back by one of Quailan's men. He lands precariously stuck in a group of trees, hanging a few feet from the ground. A pack of wolves find the boy and see there chance for an quick meal. The wolves mill around the half dead boy, standing on their hind legs trying to get at the boy's feet. Frank comes along and sees the wolves. He fires a shot into the sky, scaring the wolves away. As one of Quailan's men is tracking Gabe, who has one of the cases of money with an electronic strap, the tracking devise goes wild and we discover that Gabe has removed the electronic collar from the case and placed on a rabbit. The rabbit hops up to the top of the little null where the man proceeds to shoot at the rabbit. When the air clears we see the rabbit hop back up to the top of the null. Other animal action consisted of a man petting his dog in a background scene and Jesse at her stable brushing her horse with two other horses present in the background.