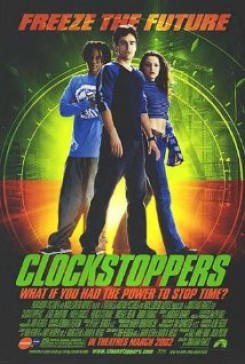 A scientist invents a mechanism that speeds up any target that it hits, effectively making it seem like time is standing still. When the scientist's son, Zak (Jesse Bradford), discovers his dad's cool secret, Zak uses it to impress a girl, Francesca (Paula Garces). Little do they know, however, that the clockstopper has a dire side effect - rapid aging. French Stewart appears as a renegade science freak on the run from the evil corporation that wants sole ownership of the clockstopper.

A combination of shots with a real opossum and a fake, stuffed opossum were used. When Zak first sees the animal on top of the garbage can it is a real one and then it is replaced with the fake animal, which he pokes. When Zak carries the animal into the kitchen to show his girlfriend what he found, the actor is actually holding the fake one by the tail and he drops it to the ground. Then the real opossum was used to run around the kitchen as the kids chase it and try to squirt it with the hose from the kitchen sink. There were five trainers on the set and one trainer would set the animal on its first mark and another trainer would set the opossum's cage on the destination mark. The opossum was trained to run to its cage, where it was comfortable. When the opossum is shown being squirted briefly, the fake one was used.

Four trainers were on set to release the pigeons in a brief scene where birds fly in the park while Zack and Francesca are walking. Two trainers released 24 pigeons in the air, while another trainer stood up on a scaffold and held up cages with food inside to lure the birds back. The birds flew right into the cages.

A dog being walked on a leash becomes a victim of Zak's newfound time control when it is suddenly shown frozen as time seems to stand still. Another dog stands frozen with his leg up, relieving itself on a tree. As revenge for a nearby parking meter maid's overzealous ticketing, Zak takes the urinating dog midstream and places it on the front seat of her cart. When he unfreezes time, the dog continues with its business, effectively soiling the meter maid's steering wheel. A 71/2 year-old Australian Cattle Dog mix named Beans was used in this scene. She was trained to lift up her leg, and the special effects department added in the stream in post production.

Still testing his clockstopper, Zak stands over a flower, which has a bee flying around it. He cups his hand around the bee and lifts it up in his hand then pushes it back down to the flower with his finger. The bee was computer generated. The hummingbird was also computer generated.