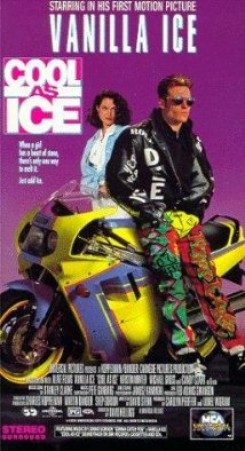 Cool As Ice is a story revolving around the rock/rap group Vanilla Ice. Johnny Ice, the lead singer of the rap group, gathers together the rest of the members of his band and they take off on their flashy motorcycles to visit Johnny's very unusual grandparents. As they arrive in the small suburban town one of the motorcycles breaks down. Johnny's grandfather claims he can fix it, and in minutes he has the motorcycle disassembled. He has trouble trying to put the bike back together, which makes it mandatory that everyone stay a few days longer than they had planned. While waiting for the bike to be repaired Johnny meets Kathy, a local college girl. Johnny is quite persistent, and finally gets Kathy to go out with him. They start spending all of their time together, against Kathy's parents wishes and fall in love. At the same time that Johnny and his friends arrive in town, so do two hoods that are looking for Kathy's father, Gordon Wyler. Gordon, formerly Jim Brackett, used to be a policeman, but he and his wife Grace, formerly Sarah, were re-located after Gordon testified in a fraud case. The two thugs are the same ones that Gordon had put away, and they have come to collect the money they think Gordon has been keeping from them all this time. The shady pair kidnap Kathy's little brother for ransom. Johnny and Kathy now emb

The original script included animal action scenes involving a dog, a frog and some horses. All of this animal action has been cut. The only remaining animal action is goldfish swimming in a fish bowl.