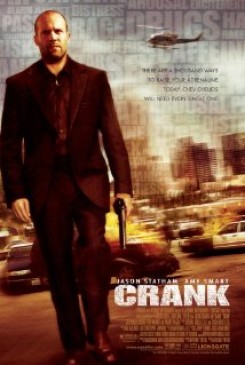 Hit man Chev Chelios (Jason Statham) wakes up to the worst day of his life when he learns that rival gangster Ricky Verona (Jose Pablo Cantillo) broke in overnight and injected him with a slow-acting poison. Until Chev locates an antidote, the only way to stave off the fatal effect of this unknown toxin is to maintain his adrenaline level at its peak as he crisscrosses Los Angeles creating havoc at every turn.

Ricky sits and feeds pieces of meat to his pet rottweiler when Chev calls with news about Ricky's brother. The dog was well-prepared for this mild action and trainers remained just off camera as the scene was filmed.

Safety Representatives were not able to monitor the filming of the caged parakeet that supposedly explodes when fired upon. However, the production has submitted documentation attesting to the fact that no bird was gunned down in the film; this was an entirely digital effect created in post-production.

After screening the finished film and checking the animal action supervised during production, we acknowledge that the filmmakers have cooperated fully with our process. Although the film qualifies for a modified end credit disclaimer of "American Humane monitored the animal action", no pre-release screening was given and therefore no end credit appears in the film.