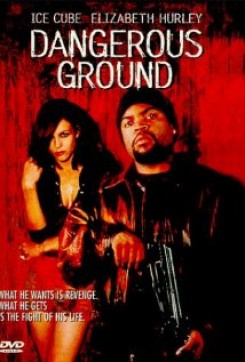 Dangerous Ground is an action drama about Vusi, an African man living in America, who has to return back to his homeland for his fathers burial ritual. When Vusi arrives he finds out that Steven, his youngest brother, hasn't been seen or heard from by anyone in his family for awhile and his mother is worried. Vusi stays in Africa and travels to Johannesburg to look for his brother. He goes to Steven's apartment and meets Karen, Steven's white neighbor and girlfriend. Together they find Steven who is in hiding because he is a drug dealer and coke addict who owes his supplier, Muki, fifteen thousand American dollars. Vusi has the money wired to him from America and they go to pay Muki, but he takes the money and kills Steven anyhow. After Muki proved his point that no-one gets away with not paying him on time, Vusi and Karen are let go. They decide to get revenge for Steven's death so they get Ernest, Vusi's other brother who is an ex-MK soldier, and together they kill Muki and his men.

Part of the burial ritual in Vusi's tribe states the oldest son will pay homage to the dead through sacrifice of an animal. When Vusi arrives at the village, there is a cow laying on the ground. Some of the tribe members are holding the cow down waiting for the sacrifice. Vusi can't kill the animal, so his brother Ernest grabs the spear, raises it, and supposedly kills the cow. This is shot in cuts and it appears the cow was never harmed. There is also a goat waiting to be sacrificed when Steven's body is brought back to the village. Vusi, having so much anger built up, quickly goes up to the goat and supposedly cuts its throat. This was also shot in cuts and it appears the goat was never harmed. While Vusi and Karen are searching for Steven, they drive through a parade where some of the men are on horseback. One of the men converses with Karen and then he backs up on the horse and lets their car drive through the crowd. The horse and rider were in a clear area which allowed the horse to move freely. After Muki kills Steven, his men leave his body at a garbage dump site. Vusi and Karen go to collect the body and hundreds of birds are seen flying amongst the garbage. Throughout the film, cows, a rooster, a dog, and fish in a fishtank are seen as background. As this was a foreign production, American Humane was not on the set. After several attempts to acquire information regarding animal action we were unable to obtain this information.