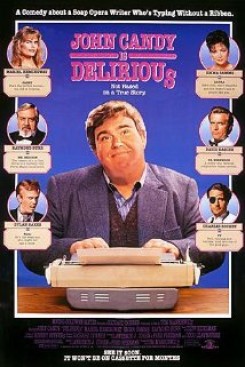 Delirious is an amusing spoof of television soap operas. Jack writes for a popular soap but is at odds with the producers who want to change his plot. He has a crush on the star of the show and she uses him to get her way as he is a door mat for her. After Jack is accidently hit on the head, in his delirium he finds himself the lead of his own soap opera. All the characters and situations he writes about come to life and in order to change any event, he need only to type it on his typewriter. His imagination soars with the possibilities.

Jack fancies himself a dashing and romantic adventurer and gallops to the aid of the beautiful Rachel, who is clinging to her runaway horse. The horses rear and run wildly across fields jumping over obstacles and racing alongside the edge of a steep cliff. Jack finally brings her horse to a halt just as it is about to plunge over the edge. This scene was shot in cuts using stunt doubles for the actors. Trained rearing and jumping horses were used. The horses never came too close to the edge of the cliff, but the effect was achieved via camera angles. Another scene where Jack was on a runaway horse and rides so clumsily that he is nearly upside-down, was filmed in much the same way with a stunt rider.