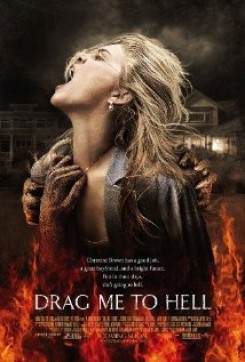 Drag Me To Hell

In the hope of getting a promotion, Christine Brown (Alison Lohman) denies an older woman (Lorna Raver) an extension on her home loan. The woman then puts an evil curse on Christine and makes her life a living hell.

Christine (Alison Lohman) holds a kitten as she says goodbye to Clay (Justin Long) at the door. After he leaves, she walks into the kitchen and sets the kitten on the table. When she hears a noise, the kitten jumps off the table as the lights go out and a strong wind blows through the windows. This scene was filmed in separate shots. The trainer introduced the cast and crew to the kitten before filming began and instructed them on its proper handling. The set was enclosed and only necessary cast and crew were present. A trainer handed the kitten to the actress right before cameras rolled and then retrieved it afterwards. The trainer placed the kitten on the table while another trainer stood just off-camera and used a toy and a bait stick to get the kitten to jump down off the table, which was a height it was accustomed to jumping. Several fans were placed around the set to make it appear as if the wind was blowing.

Later, Christine sits at the table and pets the kitten, which is on the floor. A trainer placed the kitten on its mark, and the actress petted it while it sat there and enjoyed the attention.

In one scene, as Christine approaches the kitten, it hisses at her. This was an insert shot that was filmed separately and inserted into the film in post-production. The trainer placed the kitten on its mark and stood just off-camera, using toys to get the animal excited and to cue the hiss. This was a game that the cat and trainer played often, so the cat was very accustomed to this action.

A man pulls a goat into a room to be sacrificed during a séance. The goat appears to resist by pulling at the rope and even standing on its hind legs at one point, but the man proceeds to pull it to the table. As a woman begins the séance, she touches the goat's head and the wind begins to blow. A man takes a knife and attempts to cut the goat's throat, but does not succeed before the goat bites the man. This scene was filmed in separate shots. The actors were all instructed on the handling of the animal before filming began. The goat was well-rehearsed for this scene and was unfazed by the fans simulating wind and the noises of rattling objects. The actor was instructed on how to lead the goat, and when the goat mildly resisted, the actor exaggerated his actions to make it look like more of a struggle. An off-camera trainer then cued the goat to rear up on its hind legs. The goat's rope was attached to an unseen hook under the table and, before filming, the trainer instructed the actor on how to attach it. An animatronic goat was used for the last part of the scene in which the goat bites the man and has its throat sliced.

Production provided documentation that the flies, worms and maggots, and the cat that was vomited out of a man's mouth were all fake.