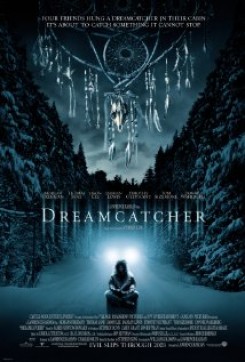 Dreamcatcher, based on a book by Stephen King, weaves a tale of four young friends who become bonded psychically after a childhood act of humane heroism. After their rescue of a mentally challenged boy, they develop uncanny powers. They remain friends and as adults make an annual pilgrimage to a hunting cabin in Maine. On one such trip, they are overtaken by a blizzard that brings with its ferocity an alien presence seeking to overtake life on earth. Challenged to stop this alien force, the friends must overcome a dysfunctional military intervention, the Colonel obsessed with his mission, and an alien form that can walk into human form to subvert from within and without. The fate of the world lies in the balance.

Hunting as we know it:

While some of the group are off getting supplies, another is out in the snowy woods deer hunting. There is an extreme close up of a deer from the point of view of the hunter who has the animal in his sites. A mysteriously disoriented stranger stumbles into the area and the deer is saved, at least from its human predator.

For this scene trainers led a buck into an enclosed area and placed food on the ground to encourage the deer to stay on the mark. The trainers made sounds and gave verbal cues to get the animal to pick up its head and look in different directions. Fake snow was generated for added effect. After filming, the animal was again led off set by the trainers.

Back in the cabin, two of the friends put the stranger who appears to be wounded, to bed and return to the front room of the cabin. They notice an extraordinary event unfolding outside the window. Animals of all woodland species appear to be making a mass exodus from the forest. Some of the animals appear to have wounds, but they methodically keep moving through the woods as if fleeing from an unseen force.

For this scene many different animals were released alone or in species specific groups to move A to B past the cabin at different distances from the camera. Later in production more animals were used to move A to B in front of a green screen and were later edited into the location background. Two cougars, a raven, a bald eagle, a robin, deer, ferrets, rabbits, a barn owl, a bear, raccoons, a coyote, and a dog were used. Each species was released separately on the set and removed prior to another being brought into the area. The birds were either placed on the set by the trainers or flown separately from a trainer at point A to a waiting trainer at point B. All the animals were accustomed to this behavior and prepped for the routine release and movement toward an awaiting food reward. Special prosthetic makeup was applied to some of the animals to make it appear as if they had been attacked by the alien invaders and were victim to the lethal alien viral fungus or "byrus." The makeup was non-toxic, the large area fenced off and the near-by forest road closed to all traffic.

The alien invaders take the form of what the characters refer to as a "shit weasel". This creature was created by the special effects team. Sometimes the weasel enters the body of a human or animal so it can grow and reproduce. The aliens also have the ability to take over the body of a human and pose as that person. This happens to one of the characters, Jonesy, who is taken over by the alien known as Mr. Grey.

As Mr. Grey, he hijacks a truck, kills the driver and encourages the driver's dog, Ike, to eat the insides of one of the dead aliens that is being transported in the back of the truck. For this scene two German Shephards, Ranger and Radar, were prepped to play the part of Ike. The dogs were cued off screen by the trainers to sit in the cab of the truck, go to the open door, bark at Mr. Grey, jump out and then go to the back of the truck. The actor, prepped by trainers, cued the dog to jump into the back of the truck and eat from an open wound in the abdomen of the alien. Since the back of the truck was approximately five feet off the ground a special platform was constructed to help the dog jump up in 2 ½ foot increments. The guts were actually a real food concoction prepared by the trainers from some of the dogs' favorite foods and kept warm with a heater after being placed in the prop alien body both to keep it from freezing and make it more appetizing.

After Ike has eaten the alien remains, Mr. Grey loads them both into the truck and takes off. The dog appears to be asleep on the front seat although its legs are seen twitching and its stomach pulsing. Mr. Grey losses control of the truck in the snow and crashes it off the road. An animatronic dog was used for this sequence that could be controlled to move its feet, limbs and stomach. The live dog was in no way endangered by the stunt crash and the sounds of whimpering were added in post production.

Undaunted, Mr. Grey manages to steal a police car and loads Ike into the back seat. The dog appears to be asleep but its stomach is now swollen and pulsing. For this scene a prosthetic stomach was applied to the dog which was easily removable. The trainers rehearsed with the prosthetic in pre-production to check the dog's comfort levels. Since the dog appeared to be quite comfortable with the application of the device it was used during production. The dog was cued to lie down on the seat of the car and the trainer was in the car with the animal. The bladder of the prosthetic was manipulated by special effects' personnel and at one point the dog was so comfortable it fell asleep during filming.

There is one moment where Mr. Grey stops the police cruiser short and Ike appears to be thrown forward. To set up the shot and create the final effect, both the real and the animatronic dog were used to film the sequence. When the real dog was in the car, a trainer was present at all times.

Mr. Grey finally reaches his destination. He picks up the dog, carries it over his shoulders, staggering under the weight and into the building where he sets Ike down. For this part of the sequence both a stuffie and an animatronic dog were used. As the scene continues, Ike is seen lying on the floor, howling, moaning and barking a bit as his stomach swells and pulses. For this the real dogs were used with the prosthetic stomach and additional non-toxic stage blood. The trainers encouraged the dog to make the sounds with cues the dog understood as "speak" behaviors. Again, the prosthetic stomach was manipulated by the special effects' crew. The shit weasel alien form that emerges from Ike was a computer-generated effect.

Throughout production, the dogs were provided warm shelters and rotated to avoid tiring any one animal. Trainers provided plenty of exercise and playtime between filming sequences. The vehicles used for filming were always kept warm for the animals and breaks and treats were plentiful. The trainers and the animals were given adequate pre-production prep time to effectively prepare the dogs, not only for the multiple behaviors required, but also for the prosthetics and various location sets so there was a high level of comfort for both the animals and the actors interacting with them.

In several scenes dead animals or animal parts are seen wrapped in plastic as evidence of the alien attack. These were all prop pieces and not real animals.