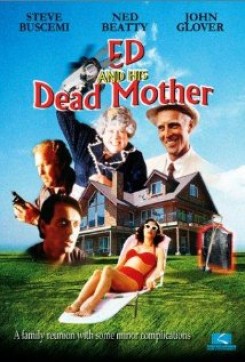 Ed And His Dead Mother

Ed and His Dead Mother is the ridiculous story of Ed Chilton and how he has his dead mother re-animated. Ed, a real mama's boy, has been mourning the loss of his mother for almost a year when he gets a visit from Mr. Paddle, a solicitor from Happy People Corporation. Mr. Paddle proceeds to tell Ed that, for a slight fee, he can re-animate his mother and bring her back to life. The skeptical Ed agrees and pays Mr. Paddle, who brings Ed's mother back home the very next evening. We notice some very surprizing changes in Ed's "mother" and watch Ed as he tries to cope with this extremely preposterous situation.

Animal action is mild. Cockroaches are seen in three different scenes, as this is what Mrs. Chilton must eat to retain life. The cockroaches are never really eaten, or even seen in any simulated situation of being eaten. They are, however, seen in a box that is given to Ed when his mother is brought home, so he can feed her. They are also seen in a jar being handed to Ed's mother for dinner. Both of these containers were aerated. One cockroach is also seen crawling across the back of an actress' shirt. For this the cockroach was merely placed on the actress by the handler and then removed when the scene was completed. At one point Mrs. Chilton runs after a dog with a knife and fork as if she intends to eat him. The dog had been called to "come" by his trainer, who was out of camera range, and merely ran down the sidewalk followed by the actress. Ed's relatives come for a visit with their little dog, and the dog is seen being part of the family. Ed also has an aquarium with fish, which are in two scenes as atmosphere.