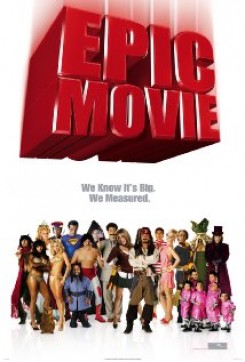 Four orphans from very different backgrounds find golden tickets that lead them on an Epic adventure of a lifetime. The creators of "Scary Movie" and "Date Movie" spoof blockbuster films, exploring a chocolate factory, a mysterious land through a wardrobe, a museum that holds the code to an age-old question, and wrestling at a monastery in Mexico.

Susan (Faune Chambers) takes a trip on a plane. The flight attendant offers her a drink of water and pours a small snake into Susan's cup. This scene was filmed in several different shots. A real snake was placed in the cup by a wrangler for close-ups and removed after each take. A rubber snake was used for the remainder of the scene.

During the flight, snakes crawl on and around Susan's legs. Wranglers placed snakes one at a time around the actress' feet and legs, and stayed just off camera to recapture the snakes at the end of the take. The trainer held a safety meeting and the actress was instructed on the handling of snakes before filming began.

A snake hangs down from the ceiling of the plane while a woman reads a magazine. When the woman looks up, the snake is gone. She returns to her reading, and snakes begin to drop into her lap. A wrangler stood on an apple crate to lower snakes into the actress' lap from above camera range. Doubling as extras, the wranglers had easy access to control the snakes and were given ample time to collect them at the end of the take. An extensive safety meeting was held by the Certified Animal Safety Representative prior to filming.

As snakes take over the plane, a scared passenger runs down the aisle. A combination of live snakes, rubber snakes and computer generated snakes were used to create this scene. A wrangler doubled as the actor in this scene to ensure the snakes' safety. Wranglers placed live snakes on their marks and stayed close by to collect them when filming was over.

Susan falls from the plane and lands on a celebrity and her pampered pooch. The dog is unharmed, and runs off, leaving his crushed owner on the sidewalk. This scene was filmed in several different shots. The trainer handed the dog to the actress just before the cameras rolled. In another shot, a stunt actress fell on top of a dummy and a stuffed dog. The real dog was then put on its mark and it walked to an awaiting trainer. The actress playing the celebrity was instructed on the handling of the dog before filming began.

Unicorns are led through a village while another one is later seen grazing in a field. Horses were given a mystical makeover with Styrofoam horns that were attached with a special nontoxic adhesive. Costumed trainers led the horses, and alfalfa was placed on the ground for the horses to graze on.

Production provided documentation that a dead cat, a parrot and a rooster that appear in the film were fake.