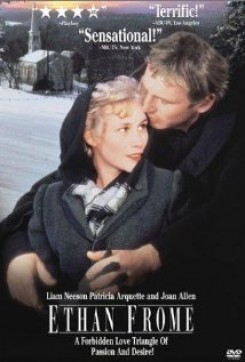 Ethan Frome is the tragic story of a man who is caught in a marriage to a cruel, sickly wife and falls in love with another woman. Zeena, Ethan's distant cousin, has been sent to the Frome household to tend to the long time ailing Mrs. Frome, Ethan's mother. Zeena does what she can for the woman for over a year, but her ailments finally take the aging woman's life. Ethan and Zeena decide to marry, both out of a desperate need for companionship. As time goes by, Zeena becomes more and more "ill". For the most part this is all in her mind, as she has hypochondriac tendencies. She claims that tending to Ethan's mother has taken its toll on her. Zeena insists that she needs a live in, just like his mother had, to help her. She sends for her cousin's niece, Mattie, who has just lost her parents and has no place to live. Although Ethan is capable of tending to his wife and the farm, he permits Mattie to move into their house, just to keep the peace with his wife. Mattie tries her best to cook, clean and wait on Zeena, but as we can see she is adept in none of these areas. Zeena is quite patient with the girl though, as she does not want to loose her chance at having live in help. As time passes, Mattie becomes quite the good little helper that Zeena had wanted. Ethan, too, has noticed the improvement in Mattie. In fact, he finds himself noticing Mattie quite often. Mattie, a very attractive, gay young woman, has a couple of young men from town very interested in her, but she pays them no attention, as her interests lean toward Ethan. Ethan and Mattie tend to their own chores, but manage to steal little moments to talk and laugh between themselves. One day Zeena announces that she must travel out of town to see a new doctor that may be able to help her. With this, she leaves Ethan and Mattie to attend to everything until she returns the next evening. That evening Mattie makes a very nice dinner for Ethan and the two dine together, alone for the first time. Their feelings are obvious for one another, but they do their best to conceal it. While dining, the cat jumps up on the dinner table in search of a handout, but when he does he knocks over Zeena's prized pickle platter that Mattie used to set a pretty table. Mattie is horrified and breaks down in tears. Ethan goes to console her, and by doing so, their real feelings cannot help but rise to the surface. They fall desperately and hopelessly into each others arms, deeply consumed with love and passion. Upon Zeena's return she senses that the two are too chummy for her liking and tells Ethan that Mattie will no longer do, and that she has hired another live in. Mattie must leave. Both Mattie and Ethan are shocked and horrified at this news, but, both knowing that what they have done is wrong, they comply with Zeena's wishes. Ethan drives Mattie to the town to catch her train, both of them heartsick. They stop before reaching the train station to bobsled down the mountain side, so they may steal just a few more moments together before Mattie must leave Ethan's life forever. Their one last ride down the mountain leads to this tragic twist of an ending of a love that could never be.

Although horses are seen throughout in this period piece, they are mostly background and/or atmosphere. Horses are seen in several scenes pulling wagons or sleds. In one scene, during a surprize snow storm, Ethan and another man must lead their wagon and horse through the blizzard to safety. The blizzard is so fast and intense that one of the wheels of the wagon sinks into the snow. Ethan unhitches the horse from the wagon and leads it to the shelter of his barn. This scene was shot in several cuts. When the wheel falls down into the snow and becomes stuck, this is just a shot of the wheel, the horse is not hitched to the wagon at this time. After the wagon is removed from the hole, the horse is re-hitched to the wagon for the remainder of the scene. Special Effect snow was used to make it appear that there was a blizzard. The horse was never in any danger, nor exposed to the extreme cold of a blizzard. There are a few scenes in which you will see the driver of a wagon snap his whip to get the horse to move. These scenes were all shot in cuts. No contact of whip and horse ever took place. In a scene when Ethan goes to the barn to collect eggs, he enters to find one of his chickens laying on the ground dead. He picks up the dead chicken and sets it on a shelf. A chicken that had died of natural causes was frozen, then thawed the day of filming for use in this scene. Chickens are also seen as background in two other scenes. In another scene Ethan looks out of his window and sees a dead fox laying on the ground in front of his house, blood surrounding the fox's body. Ethan goes out, picks up the fox, carries it over to the barn and nails the fox, by the tail, to the door. A stuffed fox was used for this scene, with stage blood (make-up) placed on and around the "dead" body. The Frome's also have a pet cat that is seen periodically being petted, walking about the house and eating.