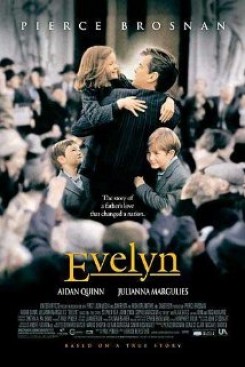 When his wife abandons the family on the day after Christmas, Desmond Doyle (Pierce Brosnan) is devastated. Faced with unemployment and no woman in the house, he is forced to relinquish his three children, Evelyn (Sophie Vavasseur), Noel and Brenden, to the authorities. The Catholic Church and the Irish courts decide the Doyle children are to be put into Church-run orphanages. Although a judge assures Desmond that he will be able to have his children again once his financial situation improves, he ultimately must wage a court battle to do so. Evelyn and her brothers suffer the abuses of life in an orphanage while their father fights for their return. Based on a true story, the compelling court battle and the outcome become a landmark case in the Irish justice system.

During his struggle, Desmond attempts to raise funds for his legal costs by betting at the dog track. There is a scene in the film showing the gamekeeper feeding some of the dogs and withholding food from the favored greyhound, Slippery Slim, in order to fix the outcome of the race. The scene showing the actual greyhound race was staged for the film using privately owned dogs. According to the credits on the film the role of Slippery Slim was played by the greyhound named Sally.

American Humane Association did not supervise Evelyn on set in Ireland, but was notified of the production, screened the film and discussed the animal action with the distributor. AHA does not condone greyhound racing and cannot attest to the treatment given the animals during production.

In Ireland there are seventeen licensed dog tracks and hundreds more that are unlicensed amateur tracks called "flapping tracks." Ireland is the world's largest breeder of greyhounds, reporting 20,000 pups registered each year. Those pups that are not registered and that will not race are destroyed. In Ireland, the breed is considered a commercial product, not suitable as a pet. Ireland exports almost 50% of the dogs to the UK and to other countries such as the U.S., Spain, Korea and Viet Nam where racing is growing in popularity. The Irish R.S.P.C.A. has reported that approximately 11,000 of these racing dogs are "unaccounted for" each year. The Irish Racing Board has admitted to destroying 8,000 per year. Rescue efforts are fledgling in this county and consist of a handful of concerned private parties.

In the U.S. there is a growing number of greyhound rescue groups throughout the country. The National Greyhound Adoption Program has succeeded in finding homes for many of the dogs cast off by the racing industry. It has been reported that over 20,000 greyhounds are killed in the U.S. each year either because of injury or simply because they are not fast enough to win. AHA encourages legislation that will ban dog racing where it currently exists.

Below is AHA's policy statement regarding dog racing. AHA also encourages concerned audiences to write to the Department of Agriculture in Ireland to lend support in ending the cruel treatment of dogs used in this venue. Support can also be given to greyhound rescue efforts both in the U.S. and abroad through Wings for Greyhounds, Inc., The National Greyhound Adoption Program and the American European Greyhound Alliance. For further information on this issue, go to www.Americanhumane.org.

Cruelty is an unavoidable by-product of commercial dog racing. Even though it has been banned by the National Greyhound Association, training of greyhounds with live rabbits or other animals is still practiced. The dogs are allowed to chase, terrorize, and rip apart the animal lures. If a rabbit succeeds in avoiding capture and death in one chase, it is used again until it is finally caught and killed.

The dogs themselves suffer from a planned breeding, testing, and rejection program that creates an unwanted overpopulation of racing dogs that do not "make the grade" on the track. This deliberate breeding adds to an already uncontrollable and tragic overpopulation problem with the general pet population. Despite some efforts to find homes for unwanted racing dogs, the majority are destroyed by their owners or taken to animal shelters to be euthanized.

Further, forcing dogs to race up to 60 or 70 times a year in "hard track" conditions, has resulted in an epidemic of crippling leg injuries. In 1985, up to two thirds of advertised stud dogs were retired due to injury.