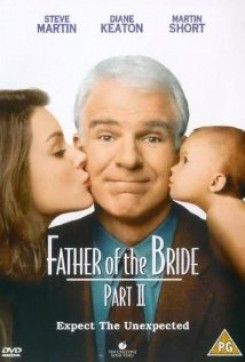 Father of The Bride 2

Father Of The Bride II is based on the sequel to the hilarious remake of Father of The Bride. George was feeling pretty smug and happy after making it through the ordeal and expense of the wedding. He was making plans to retire soon, so that he and Nina could start traveling and finally see something of the world. But unfortunately, George is thrown a curve ball when he finds out that Annie, his daughter, is going to make him a grandfather in nine months. He goes in to a mid-life crisis, sells the house to move near the beach, and goes to the hair dresser to have his hair dyed. During this time of trying to regain his youth, he seduces Nina in the kitchen and the results are disastrous. The man that ends up buying the house wants them out in ten days and he even pays George an extra fifteen thousand dollars to do it. Since they haven't begun to look for a new place yet, the MacKenzies, their son-in-law's parents, offer them their home while they are out of town. Therefore, Nina and George move in but aren't there for long when Nina starts feeling nauseated all the time. Nina goes to the doctor for a check-up, thinking she is going through the change of life. However, that is not what the doctor tells her and George. The doctor informs them that not only are they going to be grandparents, but they are going to be parents as well. George's little seduction in the kitchen turned out to be more fruitful than he anticipated. The hilarious antics are just beginning as George buys back his house for three times the amount he sold it for and agrees to let Franck Egglehoffer, the decorator from the wedding, do the nursery. But the fun doesn't stop there, because Bryan, Annie's husband, has to go out of town for a few weeks. Therefore Annie moves in with her parents. Now George has two women in his house that are pregnant with all the cravings that women in their condition are prone to have. The only thing else that could happen is if the two were to go into labor at the same time while in George's care.

The animal action consists of the use of two dogs and two storks. When George and Nina go to the MacKenzie's home to stay, they have to share the house with two Dobermans. These two dogs do not like George and they show him that repeatedly. As the MacKenzies are leaving, the dogs come in and Mr. MacKenzie bends down to tell them good-bye and proceeds to kiss the dogs on the mouth. The dogs follow Mr. MacKenzie to the door and whimper at the door after it shuts behind him. Then the dogs turn to George and begin to growl and bark at him. This scene was shot in cuts. To accomplish the shot of Mr. MacKenzie kissing the dogs good-bye, the trainers #1 & #2 placed each dog on his mark and using voice commands told them to stand and stay. The actor had merely bent down in front of the dogs and with food applied to his face, the dogs began to lick it. In order to get the dogs to whimper at the closed door, trainer #1 & #2 were on the other side of the door calling to the dogs. When the dogs turn to George and start to growl and bark, the trainers placed the dogs on their marks and told them to stay. Then the trainers stood behind the actor and using voice commands to get the dogs to look in the correct direction, told them to speak. Later that same night when Nina and George are going to bed, the two dogs are already there waiting on the bed. Nina nudges one of the dogs over and gets into bed. But, when George approaches and attempts to get into bed, the one dog stands on the bed and starts barking, while the other yawns and puts his head on Nina's arm. George sits on the floor next to Nina's side of the bed and when he attempts to sit on the bed a while later, one of the dogs starts barking at him again. This scene was filmed in cuts. Trainer #1 & #2 placed the dogs on the bed and then trainer #1 cued the dog to yawn. When the other dog stands on the bed and barks, the trainer had merely cued the dog with voice commands to tell him to stand and speak. In yet another scene, one of the dogs nudges Nina's hand as she talks to George. The actress previously had food in the palm of her hand and the dog was merely reacting to the smell on her hand. In one other scene, George is running down the sidewalk towards his old house when he jumps over a dog being walked by his owner. The actor and the dog walking had been prepped before the actual filming of the scene. There is a scene at a baby shower when two storks come out into the garden. One stork is wearing a straw bonnet and shawl, while the other one is wearing a top hat and bow tie. Trainer #1 had merely released the storks to trainer #2 who held food in his hand to coax the birds to come to him. The garments were very loose and non-restricting.