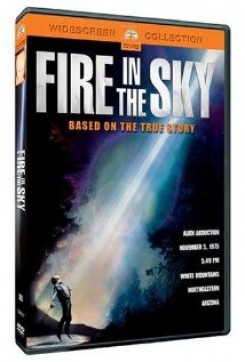 Fire In The Sky

Fire In The Sky, based on a supposedly true story, is told in flashback sequences from the point of view of six men, all of whom were involved in some way with the abduction of Travis Walton by alien beings. Travis kisses his girl good-bye and goes off to work with his brothers Dallas and Mike and friends Bobby and Greg, all of whom are lumber jacks. At the end of their day, as the men are departing from the wooded area they have been clearing, they see what they think is a forest fire. The entire horizon is lit bright red. As they drive closer, they see what looks like a spaceship hovering overhead. Travis is strangely drawn to the ship and gets out of the truck and walks into a clearing where a white spotlight is focused on him. He appears to be paralyzed and is struck by some type of flash, sending him to the ground. The other men are terrified at this point and they flee in the truck, leaving Travis behind. Everyone is feeling very guilty, but all are too horrified to return, except Bobby. Bobby drives back for Travis but when he arrives back at the scene Travis is gone. The men assume that the spaceship took off with Travis. They rush to town to report the incident and a search party is organized. The police are very leery of the men's story and suspect they may be trying to cover up a murder. The men's innocence is proven when Travis is found at the edge of town days later, naked and completely dehydrated. Now everyone wants to know if this was a hoax, or has this small town just had a close encounter.

Animal action is minimal. In one scene as the search party is trying to locate Travis, we see tracking dogs on leashes and men on horseback. The dogs were merely led through an open meadow by their trainers and the horses were being ridden by their owners. One of the dogs sniffs at a spot on the ground. The ground is dug up and they discover the remains of a hunting dog. The remains are never seen, only referred to in dialogue.