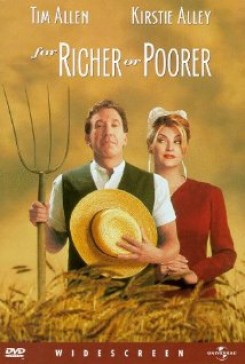 For Richer or Poorer

For Richer Or Poorer is a film about Brad, a New York City real-estate hustler, whose accountant fleeces him out of a large sum of money through crooked tax holdings. Brad and Caroline, his socialite wife, find themselves posing as an Amish couple as they hide from the IRS.

There are several scenes where horses and carriages are traveling down the road throughout the Amish community. Farm animals are seen in the background and dogs are found walking A to B, lying on the ground, barking, etc. In one scene, the horse, Big John, is running out of the barn chasing Brad. Then Big John rears and steps on Brad's foot. Brad finally gets Big John harnessed for plowing and the horse takes off, dragging Brad behind him. In another field an Amish farmer is plowing his field and watching Brad struggle with Big John. This scene was shot in cuts. A trained rearing horse and stunt double were used. The wrangler placed the horse on its mark and cued it with verbal commands. A stunt double was used for all of the trick scenes. There are a few scenes where Caroline is feeding the farm animals. When she is feeding the pigs, she falls into the pigsty. The animals were placed in their pens and the actor merely simulated feeding them. Later, Brad is riding Big John and he takes off at a gallop across a field and down the road, towards the town store. The horse comes to a screeching halt and Brad is tossed over its head, landing in the back of a truck. This scene was shot in cuts. The trainer placed the actor on the horse for all of the establishing shots. A stunt double was used for all of the trick riding and when the actor supposedly is thrown from the horse. In another scene, Big John is hitched to a tree stump and is lead forward as he pulls the stump out of the ground. The stump was lightly placed in the ground and the horse gently moved back and forth and successfully pulled the stump forward. As a safety precaution, stunt drivers and riders were used at all times. Segments involving the horses and moving vehicles were prepped prior to shooting and timed to prevent any mishaps from occurring.