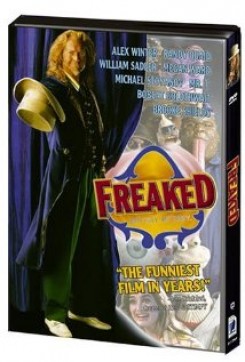 Freaked is a farce about an insane owner of a freak show who mutates his visitors into hideous freaks. Rickie Coogin, a hot, upcoming young movie star is approached by EES (Everything Except Shoes) to be their spokesperson in the tropical country of Santa Flan. They offer him five million dollars to take the job and oversee the delivery of their product, Zygrot 24. Zygrot 24 has been banned in the U.S. as it is chemically unbalanced and toxic. Rickie accepts the position and he and his friend Ernie set out for Santa Flan. When they arrive, a protest against Zygrot 24 is underway. Rickie spots one girl in this group, Julie, and immediately falls in love with her. He and his companion take Julie for a ride, not telling her who they are. As they drive along Julie spots a sign saying that there is a freak show up ahead and insists they go. They enter the eerie park and are greeted by the owner, Mr. Scruggs. He tells them that there is no regular show that day but he would be pleased to show them his private show. When they enter the building they are immediately restrained and the mad Mr. Scruggs turns them into mutated freaks with a concoction made from Zygrot 24. He will now add his latest creations to his show. Rickie, Ernie and Julie must now try to figure a way out of their predicament and stop Mr. Scruggs from capturing any further innocent victims for his mad experiments.

In one scene Julie raises her hand and a butterfly lands on her finger. She is suddenly startled and reaches her hand to her mouth, smashing the butterfly. This was a mechanical butterfly. In another scene one of the freaks, Toad Man, sees a rabbit standing at the entrance to the park. He opens his mouth and extends his tongue and snatches the bunny, eating him. This scene was shot in cuts using a real and an animated bunny. The real bunny was filmed merely standing there, and the film was spliced together with the footage of the animated bunny. In other animal action a squirrel scurries in the background of one scene. A two headed chicken, a six legged goat and a headless dog with two tails are also seen, but these are all obviously fake, mechanical animals.