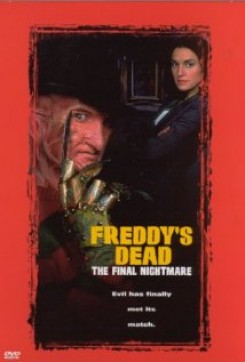 Freddy's Dead: The Final Nightmare is the fifth sequel in the Nightmare on Elm Street campy horror film series. Spencer, a troubled young man, is plagued by nightmarish dreams. He resides in a youth recovery center where he's counseled by Maggie. Maggie decides as part of Spencer's therapy, to visit the town in his nightmares. Stowing away in their van are several other troubled teens from the center. When they arrive in Springwood, they discover that all the residents are a bit crazy, and its a town without children as Freddy Kruger has murdered all of them. They also learn that Freddy once had a child that the townspeople took from him and placed in an orphanage after he murdered his wife. He sought his murderous vengeance on the town's children. When Maggie, Spencer, and the other youth return to that infamous haunted house on Elm Street, they each have nightmares that they are Freddy's long lost offspring.

Animal action is minimal. In a flashback to his childhood, Freddy is in a classroom with children who taunt him. He reaches into a cage where a hamster plays and takes out the hamster holding it briefly before putting it down out of camera range. He then picks up a hammer and pounds the table where the hamster is supposed to be. This scene was shot in cuts and the hamster was not there when the table was being hammered. In another very brief scene, a dog runs across the street and pauses as he lifts his leg to urinate. Suddenly, the urine flow ignites and the dog continues to run. During filming, the dog was merely supposed to run from A to B. However, enroute from A to B, he improvised and paused to urinate, which was left on film. The flame was a special effect added in post-production and the dog was never near any fire.