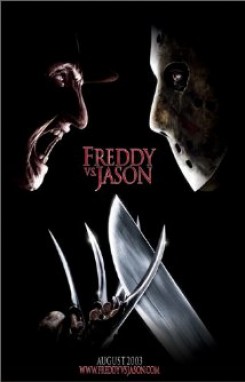 The ultimate forms of Hell are about to be unleashed on Earth once again. Because of his unforgivable sins, Freddy Krueger (Robert Englund) is stuck in Hell eternally. But he's found a way to allow him to escape: he needs to get the kids to fear again since that is what gives him his strength. He finds the perfect patsy to evoke such fear, Jason Vorhees, the killer from Camp Crystal Lake and the Friday the 13th movies. The only glitch is that when Freddy gets the strength he needs and returns, he can't seem to get Jason to go away. There are only two teenagers, Lori (Monica Keena) and Will (Jason Ritter), who know about Freddy's plans. They also have a plan: to take Jason back home to Crystal Lake, have Freddy follow them, and have them both destroy each other.

A goat is shown standing at the foot of the front steps of a house. It appears to have some blood dripping from its beard.

In one scene the unsuspecting victim, Blake, is dreaming and Freddy is about to attack, he looks over and sees a goat standing at the foot of the front steps, some blood dripping from her beard. For this one brief shot, a specially built non-skid platform was built for Peeko, the goat, to stand on. A trainer hobbled the goat with a monofilament tie so it would stay on its mark. Peeko is a milking goat and very used to being hobbled so she didn't mind. The trainer dipped the goats beard into a styrofoam cup filled with non-toxic fake blood right before the camera began filming. The fake blood was washed off with baby soap and water afterwards.