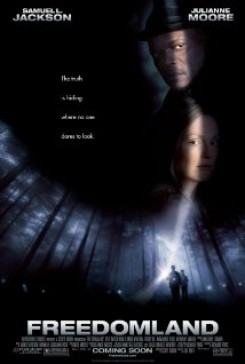 Based on the bestselling novel by Richard Price, Freedomland explores the theme of race relations in working-class northern New Jersey. When a dazed and bloody Brenda Martin (Julianne Moore) reports that her car was hijacked with her 4-year-old son, Cody, asleep in the back seat, veteran detective Lorenzo Council (Samuel L. Jackson) investigates the case but can't shake the feeling that there are holes in her story.

As the opening credits roll, the camera pans over Jersey City, and one shot is of a cat walking on the sidewalk. This unscripted animal action was filmed spontaneously as the filmmaker captured images of the city.

While volunteers search an abandoned building and its grounds, a man holds a German shepherd on a leash. The trainer handed the dog to the actor right before filming began, and had scattered treats on the ground to make it appear as though the dog was sniffing for the scent of the little boy.

Production provided documentation for the dead-bird prop seen on the floor of the abandoned building.