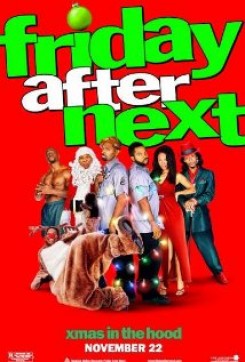 In this third installment of the Friday film series, cousins Craig (Ice Cube) and Day Day (Mike Epps) have finally moved out of their parents' homes and into their own place. Just when things are looking up, they realize that a Santa-suited burglar has stolen their rent money, forcing them to take jobs as mall security guards to earn it back before their landlady gives them the boot. One bright spot for the guys is Day Day's rambunctious canine Cheeco, featured in several comedic scenes.

Two English bulldogs named Echo and Buddy shared the role of Day Day's dog, Cheeco. In one scene, Cheeco sleeps on his back next to Day Day. When Craig tries to wake up Day Day, the dog sits up in bed and nestles by his owner's head. The actor and dogs were introduced to each other during rehearsals and quickly became off-screen buddies. The trainer placed the dog on the bed next to the actor and cued the animal from off-camera using verbal and hand signals.

Later, Cheeco excitedly runs to the front door and grabs mail from the slot. The dog rips up the letters and then guiltily hides under the covers in the bedroom. The landlady sneaks into the bedroom and the dog peeks out from under the covers and bites her rear end. To achieve this action, the trainer cued the dog with verbal and hand signals to run to the mail slot, grab the papers, and tear them up. The dog was then cued to run to the bedroom and jump up on the bed. A plastic tube was placed under the covers to guide the dog in the proper direction. For the bite, a trainer doubled as the actress wore the pooch's favorite squeaky toy taped to his padded pants, which the dog eagerly chomped.

In another scene, inside the Holy Moly Donut shop, a man smashes a fly on the window and then picks it up and flicks it to the ground. Other patrons swat their necks as flies buzz around. A trainer released the flies into the room and none were harmed for filming. The dead fly was purchased by production.