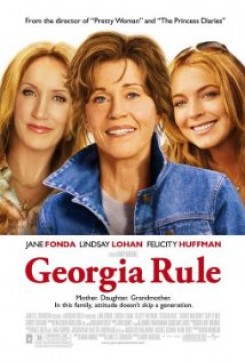 A rebellious teenager (Lohan) is sent to spend the summer with her grandmother (Fonda) by her dysfunctional mother (Huffman), who does not know how to handle her daughter. This journey seems beneficial for all three women and for their broken relationships with each other.

Rachel (Lohan) gets a job at Simon's (Dermot Mulroney) veterinary office. Inside the office, we see people with animals, such as a man sitting with his dog in the waiting room and another man carrying his dog into the office. Later, outside the office on a bench, we see three kids holding a rabbit, an iguana and a dog. A woman walks her dog out of an examining room and another woman is sitting in the waiting room holding a cat in her lap. There are also a few scenes where we see someone walking a dog on a leash in the background. These actors were all instructed on the handling of the animals before filming began. The trainers put the animals on their marks and then waited just off camera to retrieve the animals afterwards.

Harlan (Garrett Hedlund) has a pet dog that rides in the back of his pickup truck in a few scenes. The part of Harlan's dog was played by a yellow Lab named Duncan. A trainer put Duncan in the back of the pickup truck and then hid in the back with him. The trainer attached a rope to the dog and tied it to the side of the truck to prevent the dog from sliding around. The street was closed off to traffic, and the truck only traveled half a block. Later, as Rachel and Harlan fish in a boat, the dog is seen on the shore barking at them. The dog was put on its mark by the trainer, who stood off camera using a combination of verbal cues and hand signals to get the dog to look and bark at the couple in the boat. While they are out in the boat, the camera pans the area and we see a deer and a crane that flies and lands nearby on shore. Both the deer and the crane were caught naturally by the camera.

Georgia (Fonda) has a pet canary at home in a cage in her kitchen. In some scenes, she talks to the bird in the cage and in others, the caged bird is seen in the background. The cage was set up and inspected by both the trainer and the American Humane Safety Representative to make sure the bird was safe and comfortable. The canary was placed inside the cage and was very happy and content to act naturally.

American humane monitored a scene in the veterinarian's office where a chase ensues involving a pig, a dog, some ducks and a rabbit, but the scene did not appear in the theatrical release.