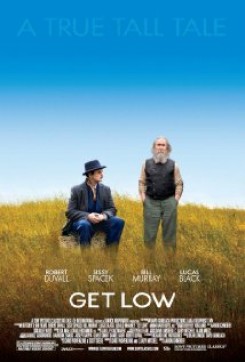 Felix lives in a small town where no one likes him very much. He plans his own "living funeral" party and invites the town in hopes that it will clear up a past incident that involved him.

Felix (Robert Duvall) owns a mule. In several scenes, the mule is seen in its stall inside a barn. The stall was custom-built for this film and had a top door that opened and a feed trough. The area was checked for safety before filming and the trainer brought the mule inside the stall to get it familiar with its surroundings. One trainer hid inside the stall with the mule as the scenes were being filmed, while another stood nearby and used a bait stick to get the mule to look in various directions. The number of cast and crew members allowed on set was limited. In one scene, Felix and Mattie (Sissy Spacek) stand in the barn and talk as they pet and feed the mule from their hands. The actors were instructed on the handling of the mule and the trainers stood nearby. All meals and treats that the mule ate were part of its regular diet.

As Felix exits the barn in one scene, he finds the mule sitting on the grass in front of the barn. The mule is sitting with its back legs stretched out in front of him, like a person sitting straight-legged. The trainer put the mule on its mark and cued it to lie down on its side. Then he cued it to sit up on its hind quarters. Although this position looked a bit awkward, it was a trained behavior that the mule was accustomed to.

Felix prepares a cart and begins to walk it toward the mule, which is running free in the yard. A trainer placed the mule on its mark while another trainer stood shaking a feed bucket where the mule was supposed to run.

Felix is feeding the mule when suddenly a man comes out of a nearby café and begins to argue with Felix. The man throws a rock at him and it hits the mule, which rears up. This scene was filmed in separate shots. The rock was a prop, made of plastic foam. Trainers then cued the rearing action, which the mule was accustomed to doing. The wagon shafts (what the mule's harness was attached to) were made of lightweight balsa wood and were beig held by the trainers. They were not attached to the wagon when the mule reared. The grounds were checked for hazards ahead of time and streets were closed to traffic. Some cars were parked on a nearby street and another car was driven slowly away from a nearby curb, but it was kept a safe distance from the animal.

American Humane also monitored a scene in which the mule pulls a wagon with a casket on it and rears up, breaking the wagon shaft and appearing to injure itself. Although there is a brief scene of the mule pulling the casket, the rearing and "injury" was cut from the theatrical release.