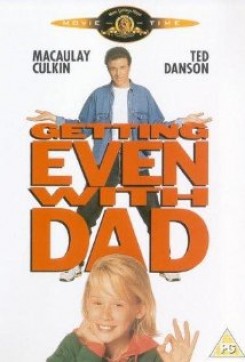 Getting Even With Dad

Getting Even With Dad is a comedy with dramatic overtones about young Tim and his father, Ray who are thrown together after a long period of separation. Tim had been living with his aunt, Ray's sister, after his mother's death from cancer and his father's incarceration for theft. Even though Ray has taken a job in a bakery since getting out of prison, he can't resist stealing a fortune in rare gold coins, with the help of two crazy accomplices. Tim eavesdrops on the three and records them on video tape as they discuss their successful heist. He then hides the loot and blackmails his dad and the other two, demanding that Ray take him out to do fun father-and -son things every day for a whole week, or he will turn in his evidence to the police. Ray explains that he just wanted to get some money to open up a bakery shop. Tim answers that he is very concerned that his dad will get caught and be sent back to prison unless they return the gold. As the father and son bond, the other two guys go crazy trying to locate the hidden loot. A female undercover cop infiltrates Tim and Ray, going out on dates with them and getting too emotionally involved for her own good. After Ray fulfills his part of the bargain, he demands the treasure from Tim who gives his dad an ultimatum, saying that he will take a bus back to his Aunt's, never to return, if his dad insists on taking the money. Ultimately, Ray's love for Tim prevails bringing things to a happy conclusion.

There is minimal animal action in this film. In one scene, when the two accomplices are out on the street trying to locate the hidden gold, they approach a mother and son walking their dog on a leash. The dog lunges at them, snarling and barking, as the mother verbally commands the dog to kill. When the guys retreat, she gives another verbal command to the dog to stop the attack and gives a tug on the leash. The dog breaks off the attack and calmly walks away with Mom and Junior. For this scene, the dog was positioned with the actress by the trainer. The dog actually obeyed the commands of the actress. In other scenes there are fish swimming in a metropolitan aquarium in downtown San Francisco, taxidermied animals in a museum of natural history, a dog on a leash in the background at a park and a dead rat being pulled out of a garbage dumpster by one of the accomplices.